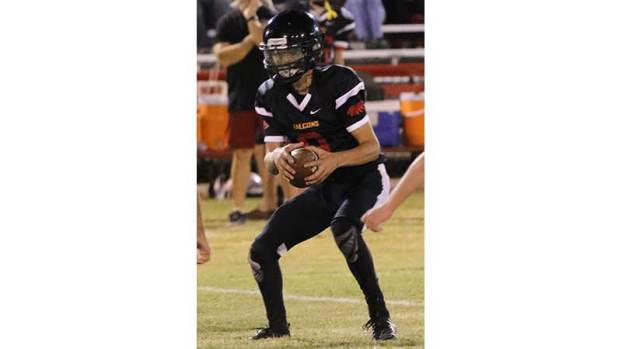 Falcons move to 7-0 in big win

Fuqua School’s varsity football team took on a fellow member of the Battlefield Conference on Friday night in the form of Quantico High School, and the host Falcons earned a 57-21 victory, improving their overall record to 7-0 this season.

“It was Senior Night, and we tried to spread the love around for some of the seniors,” Fuqua Head Coach Ben Manis said, “but we had mostly ninth- and 10th-graders and one eighth-grader playing (for) a good portion of the second quarter and all of the second half. It really gives me some hope as far as the future goes. A lot of those kids are younger and not quite developed yet, but the skeleton is there as far as the future. It’s kind of awesome to see.”

The coach highlighted the senior players who stood out early to help the Falcons develop a definitive lead, including senior quarterback Elijah Warner, who was originally set to rest for this game.

“If it wasn’t Senior Night, I probably wouldn’t have played him at all, but with Senior Night, I wanted him to get a couple of carries, just get a little bit of playing time, because you won’t have that opportunity come up again,” Manis said.

Warner did a lot with a little, carrying the ball twice for 85 yards and two touchdowns.

“What really, really, really surprised me was just the poise and the ability of Aaron Orange,” Manis said. “He’s a freshman. That’s something that we kind of were thinking about next year. That’s the next kind of question mark. With what we do, we really need more than one quarterback who’s ready to go.”

Junior quarterback Luke Gee was dealing with an injury, so Orange stepped in and went 3-for-5 passing for 69 yards on Friday.

Junior running back Hayes Barton stood out for the second straight game, this time registering 12 carries for 83 yards and a touchdown and three catches for 61 yards.

Standing atop the Virginia Independent Schools Athletic Association Division III rankings, the undefeated Falcons have a bye this week before returning to action Friday, Oct. 25, when they host Isle of Wight Academy at 7 p.m. for homecoming.