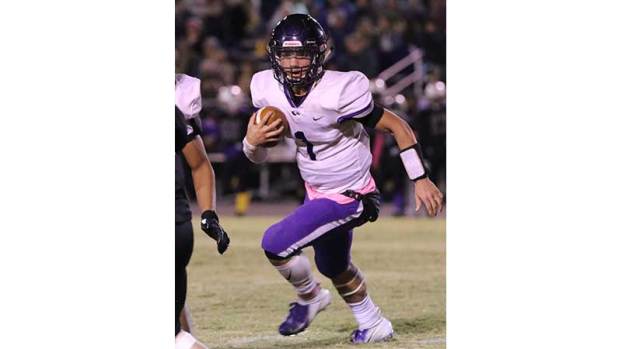 Prince Edward County High School’s varsity football team trailed 28-6 at halftime against host Central Lunenburg High School, and then the Eagles’ offense sprung to life in a big way in the second half, but the Chargers were able to stay a couple steps ahead and hold on for a 56-44 homecoming victory.

“The second half, we made a good run,” Prince Edward Head Coach Larry White said. “We just couldn’t get those good defensive stops. That was the key.”

He specifically noted the competitive fight that his players showed in the second half, which he said he was pleased with, “but we just didn’t come up with the win.”

“We found a weak spot in their defense, and so we exposed it,” White said, referring to a halftime adjustment that helped Prince Edward score 38 second-half points.

In light of senior running back/linebacker T.J. Williams’ recent decision to leave the team, the coach said he had a message for Peterson and Reed before his team left for Lunenburg County.

He liked what he saw from them.

Reacting to Peterson’s stats, White said, “He had a real good night.”

“He had some good runs,” the coach said.

The Eagles struggled in the passing game. Reed went 2-for-11 passing for 52 yards, including a 33-yard pass to Sprague.

The coach praised Reed’s contributions to the team.

White said Reed told him, “‘Coach, just put it in my hands, and let’s do it.’ He’s an athlete, and he’s a sophomore, he’s trying to carry this team. Passing-wise, it’s a little difficult. His running ability, he does real good.”

Leading the Eagles on defense was junior nose tackle Davon Manson with 12 tackles.

White highlighted the immense effort that Manson brings to everything he does, posing significant challenges to Prince Edward’s offense in practice and to opponents’ offenses in games due to his work on the line.

“I’m going to be honest with you, he gives us a lot of trouble in practice,” White said. “… He practices the way he plays. … He works really hard, doesn’t complain. He just goes at it.”

The coach noted Manson is undersized for the nose tackle position, but because of his ability and effort, opposing offenses double-team him.