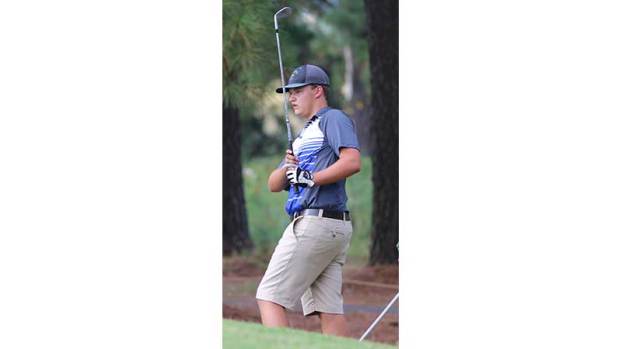 Cumberland County High School junior Thomas “Tad” Bryant III hoped for more from his performance at the state tournament this week, but his play illustrated his growth nonetheless.

Dukes demonstrate growth on the links

Cumberland County High School junior Thomas “Tad” Bryant III may have struggled Tuesday in the 2019 Virginia High School League Class 1 State Golf Tournament in Radford, but he also demonstrated some notable strides he made this year, just like the Dukes team did as a whole in the regular season.

Dukes Head Coach Monroe Preston noted that Bryant did not do as well as he had hoped he would do this week on the Pete Dye River Course of Virginia Tech in Radford, finishing in about the middle of the 60-player field.

The coach said he was also hoping for a better result for Bryant, “but I saw some things that we had worked on that he had learned, and I also think that from some of the questions and answers that he gave me that he learned some things from the experience.

“It was some things that we worked on preparing for the tournament stuff, and he, skill-wise, executed those pretty good and all,” Preston continued. “It was just one of those things that his swing was just not there that day, and that happens sometimes. … I felt good that our preparation was good. I think we both learned some things.”

The coach offered a special thanks to Chase Grubbs, a former member of the Cumberland golf team who assisted Bryant in preparation for the state tourney.

“He is a member of the club team at (Virginia Tech) and familiar with the Pete Dye course,” Preston said.

The Dukes finished the 2019 regular season with an overall record of 5-13.

“I felt real good about our season,” Preston said. “Actually, the first of the year, I thought that we would finish 6-12, so we finished 5-13. You’re always hoping that you’ll grab one here or there and finish the season better and all, but that’s pretty much what I was thinking. (I’m) proud of the guys. I thought that we could have got some more out of them. I’m hoping that they realize that and will work toward next year starting this week.”

He indicated that it was key to just get out and play some golf in the offseason.

“I was real proud of Jack McCutcheon,” Preston said of one of his team’s sophomores. “He worked on his game. His scores went down practically every match. The lowest score that he shot, if I’m not mistaken, was a 48, and he shot that in the regional tournament for the back nine.”

McCutcheon shot a 51 on the front nine to combine for an overall individual score of 99.

“He shot under a hundred, and that was just a few strokes off of actually qualifying for states,” the coach said. “He gave himself a chance, so I was real proud of that, and I’m sure he’ll probably move up or get better next year, so that gives us somebody promising for next year.”

Preston said he expects all five members of the team this year to return next season. That will include Bryant, current sophomores Calvin Foster, Michael Ward Jr. and McCutcheon and current freshman Zakary Leonard.

“There’s a couple of people that I want to talk to that might join the team next year, so I’m looking forward to next year at this point and just getting them out, making myself available to help them and all until we start practice next year,” the coach added.

Cumberland saved its best for last during the 2019 regular season, carding a nine-hole team score of 189 in its final tri-match.

“All year long I was waiting for them to break 200, and it took their last (regular) season match to do it, but I was real proud of the fact that they did break 200,” Preston said. “It’s a good bunch of guys. They do have some skills, they just need, I think, to believe in themselves as much as I believe in them.”

Reflecting on what helped make the year what it was for the Dukes on the links, Preston said, “I would like to thank all parents and others that supported us this season.”