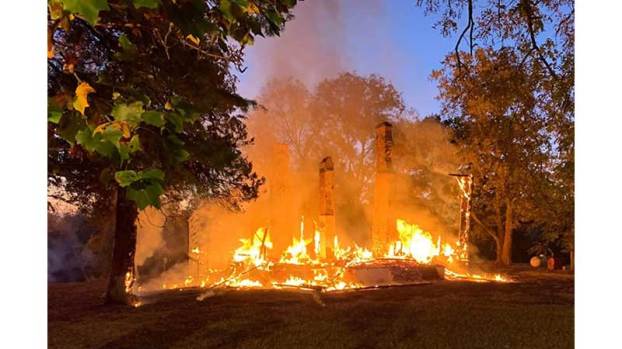 Three large chimneys and a pile of flaming debris were all that was left after a house fire burned down a Buckingham home built several centuries ago. No injuries were reported.

Units from the Arvonia, Cumberland and Macon District volunteer fire departments responded to a fire on the morning of Oct. 15 that left a centuries-old home in Buckingham burned to the ground.

According to Toney, the owners of the house were not present at the time of the fire and no injuries were sustained. He explained that the owners had purchased the house in the ’70s and used it primarily as their summer home.

While no one was injured due to the fire, the homeowners were devastated by the loss of a historic home filled with memories and valuable collections.

“It was built in the late 1700s or early 1800s,” Toney explained. “It was a huge house. I think it was three stories and a full basement. … He (the owner) said that he had a lot of valuable antiques and a whole lot of his family’s stuff. You know, China and stuff like that. Everything was gone.”

Toney estimated that the building may have been burning between 4-5 hours before the fire was discovered. “It burned the whole thing up,” he said. “No walls. The only thing that was left standing were the three chimneys. They had these great, big, three rock chimneys.”

Toney said that AVFD firefighters arrived on scene to find that several trees in close proximity to the home had also caught fire, including a large cedar tree.

Virginia Governor Ralph Northam announced on Oct. 15 the start of fall wildfire season in Virginia. Toney stated in an interview with The Herald that the risk of wildfires was in the back of his brain during AVFD’s response to the house fire.

“Yeah, that’s what we were scared of,” Toney said. “The cedar tree that was on fire, it was a huge cedar tree, probably 36 inches around. It was hollow and that one was burning inside. So, I ended up cutting that down. I figured if it would finally catch on fire, that thing would be throwing fire across the fields. As dry as it is now, it wouldn’t take much. We had two more trees that were burning and we got all of them out before we left. We stayed down there for about four hours. I think at 11 p.m. we were going around and putting foam all the way around the building just to keep it from spreading.”

Toney stated that many neighbors reported that the sky was lit up with flames early in the morning, and that several witnesses had mistaken the house fire as belonging to a power station adjacent to the home. Many loud explosions were reported at the scene.

“We found four propane bottles that had blown the tops clean off them. That could have been the explosions they were hearing.”

According to Toney, officials are still attempting to determine the origin of the fire. Toney also stated that an arson investigator would be looking into the incident.

“I told the guy that I was sorry,” Toney stated in reference to the homeowner. “I know it’s devastating, especially when you lose all of your family heirlooms that you’ve had for years.”