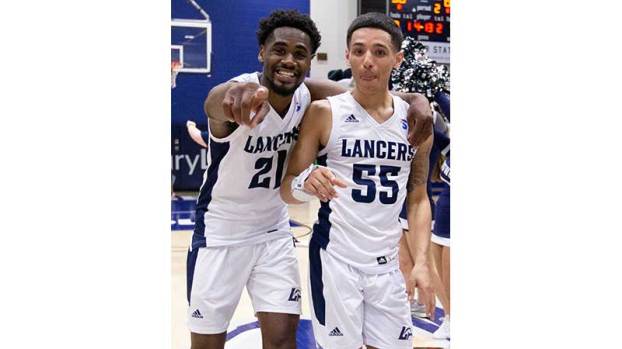 Longwood University forward JaShaun Smith, left, and guard Juan Munoz each showed leadership qualities during Saturday’s Blue-White Scrimmage, an exhibition that gave Lancer fans a glimpse at what they have to look forward to from Longwood in the 2019-20 season. (Photo by Mike Kropf / Longwood University)

5 takeaways from the Blue-White Scrimmage

At long last, Longwood University basketball is back in Willett Hall.

More than seven months since a dominant 90-68 home win over the University of Southern Mississippi in the first round of the 2019 Roman College Basketball Invitational, Head Coach Griff Aldrich’s Lancers opened the doors to Jerome Kersey Court to give Longwood fans their first look at the 2019-20 version of the team at the annual Blue-White Scrimmage.

The scrimmage, now in its second year, saw Longwood’s 15-man roster split up and go head-to-head for three eight-minute periods early Saturday. Highlights abounded, as did a bit of friendly intra-squad trash talk, and the Lancers showcased their growth from last year’s breakout 2018-19 season, along with — plot twist — black practice jerseys instead of the traditional blue.

Here are five takeaways from the Blue-White (Black-White?) Scrimmage to hold over the Lancer faithful before the team returns for Lancer Madness on Oct. 22.

1. PICK A SCORER, ANY SCORER

If you’re trying to single out one player who will likely lead Longwood in scoring this year, good luck. Last year Big South Newcomer of the Year Shabooty Phillips took that mantle, barely, with 14.0 points per game, but Saturday’s scrimmage showed an embarrassment of offensive riches for the Lancers.

During the 24-minute exhibition, five players reached double figures, led by senior Sean Flood’s 16 points. Jaylon Wilson (11 points), Christian Wilson (10), Heru Bligen (10) and DeShaun Wade (10) joined him atop Longwood’s scoring leaderboard, but in total, six different players led the two teams in scoring across the three periods. Flood, who shot 4-of-6 from three-point range and 4-of-4 from the charity stripe, was the only player to lead his team in scoring in multiple segments.

The next scoring group behind those double-digit scorers was just as crowded, with Nate Lliteras pouring in nine points, and Phillips, Leslie Nkereuwem and JaShaun Smith all scoring eight apiece. With plenty of options at Aldrich’s disposal, the friendly competition for Longwood’s scoring lead will be a race in itself this season.

The NCAA announced this past summer that the men’s three-point line would extend to 22 feet, 1 3/4 inches, a shift of a foot-and-a-half that aligns the college line with the international three-point distance. However, Saturday showed that change has done little to alter Longwood’s three-point-heavy offensive philosophy.

The Lancers uncorked nearly half of their field goal attempts from beyond the arc in the scrimmage and hit them at an impressive 39.4% (13-of-33) clip, which was even more efficient than last year’s long-range barrage that produced a school record for made threes. Outside of only a handful of contested threes, the majority of those were open looks generated by a fast-paced offensive system grounded in ball movement and ball reversals.

Flood was the biggest beneficiary of the system, hitting a team-high 4-of-6 shots from long range on the way to a team-high 16 points. Lliteras, a freshman, also flashed his shooting touch by knocking down 3-of-4, while fellow newcomers Bennett Mohn (2-of-4), Wade (2-of-3) and Christian Wilson (2-of-4) also hit multiple treys.

Uncharacteristically last year’s two leading scorers, Phillips and Jaylon Wilson, came up empty from beyond the arc Saturday, combining to miss their seven attempts. Last year those two knocked down 114 treys and shot 34.6% from three, so chalk up Saturday’s drought to an off-day. Once those two find their groove, watch out.

Rumor has it Longwood’s marketing department has kept the press hot running off extra Moe’s 3-Point Tacos coupons in preparation for another long-range onslaught.

Senior JaShaun Smith has been a Longwood fan favorite since before he even arrived in Farmville. The former high school dunking phenom, who earned an ESPN SportsCenter No. 1 play cameo shortly after signing with Longwood in 2015, has spent more time in the air as a Lancer than the top floors of Curry and Frazer.

Saturday, with Longwood’s eight newcomers taking their turns in the spotlight, Smith needed just one play to remind everyone in attendance that he’s still around.

After catching a pass from Wade in the corner, the high-flying swingman took three steps toward the basket and threw down an absolutely thunderous slam that left players on both Blue and White teams with mouths agape. Sophomore newcomer Christian Wilson, no slouch of an athlete himself, made an instinctive leap to meet Smith in the air but wisely altered his path to avoid fouling and, more notably, becoming Smith’s latest posterization.

Smith, whose all-time max vertical leap measures at 49.5 inches, finished 4-for-4 from the floor with eight points.

4. LEADING FROM THE FRONT

If a team is only as good as its leadership, Longwood is in great shape.

Longwood’s now-seniors Flood, Phillips, Smith and Jaylon Wilson were all impact players in last year’s run to the 2019 College Basketball Invitational, and this year the Lancers will take their cues from that quartet. Saturday each of those four proved that they’ve embraced their leadership roles in their own unique ways.

Along with his team-high 16 points, Flood was the most vocal of the group, acting as a coach on the floor for Aldrich and his staff. He was in constant communication with his coaches, receiving — and even suggesting — play calls and pressures. He took his teammates aside when necessary and used every second of idle time to act as an amplifier for the direction from Longwood’s bench.

Phillips, who last year emerged as the breakout newcomer of the Big South, took command of the ball at the point and was the go-to option when his team needed a play. He finished with eight points — modest by his high-scoring standards — and provided a sure hand as the spearhead of Longwood’s offense with a pair of assists and repeated penetrations into the paint.

Smith had the highlight of the game with a rim-punishing slam in the second period, but was quietly impactful throughout the game. The do-it-all swingman provided his trademark suffocating defense, was a perfect 4-of-4 from the floor and grabbed three rebounds.

Lastly, Wilson showed that the end-of-season surge that made him Longwood’s top scorer over the team’s final 11 games was no fluke, demonstrating aggressiveness and fearlessness in attacking the basket. He got to the rim more than any other player on the floor, drawing enough contact to be awarded a team-high seven free throws, all of which he hit. He finished with 11 points, two assists and no turnovers while playing 22 minutes.

And that’s not even including the leadership coming from veterans Jordan Cintron and Juan Munoz, who provided their own highlights. Cintron displayed his usual energy while playing a team-high 23 minutes, while Munoz — two years removed from a season-ending injury — did a little bit of everything at point guard, with five points and team highs of three assists and three steals.

5. A FARMVILLE HOMECOMING FOR TONY SHAVER

It’s been a while since Tony Shaver coached in the Heart of Virginia — 17 years, in fact — but his name still holds high esteem in Farmville. The Hampden-Sydney Hall of Fame coach and 500-game-winner returned to his old hometown Saturday to take in Blue-White and watch not only his former pupil, Griff Aldrich, but also his middle son, Austin Shaver, in action.

Aldrich, who played for Tony Shaver at Hampden-Sydney from 1992-96 and later coached on his staff during Hampden-Sydney’s undefeated 1999-2000 regular season, credits Shaver as a mentor and inspiration for his coaching career. Austin Shaver, meanwhile, also followed his father’s footsteps into the coaching ranks and is now in his 13th year in the profession where he has amassed a 190-179 record as an assistant coach.

Shaver also got to witness Austin in a pseudo head-coaching role, as Aldrich gave the younger Shaver the reins of the Blue team for the scrimmage. He coached that group to wins in the first two periods (25-20 and 22-20) and ultimately a 57-54 edge in the final score.

A handful of reserved and general admission season tickets remain available for purchase for both Longwood’s men’s and women’s basketball in 2019-20. To purchase, visit www.LongwoodTickets.com.