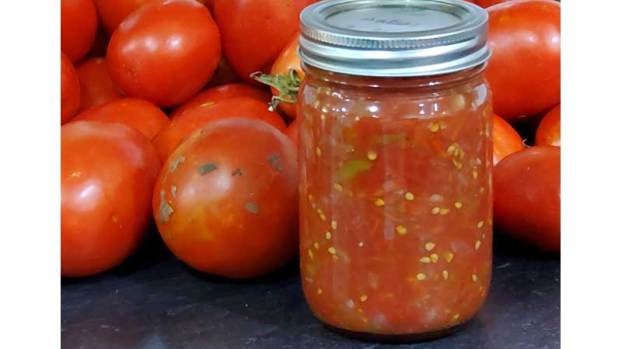 You’ve heard of Crimson Tide? Well, last month I had a red tide running through my kitchen. Way back in early spring, I prepped my vegetable garden and fully intended to plant all the usual things — okra, Yukon Gold potatoes, sweet potatoes, lots of heirloom tomatoes, leeks, onions, basil, purple hull peas and every type of pepper imaginable. Life intervened, and I only planted okra and peppers. Nevertheless, in early August I found myself with two bushels, that’s 120 pounds, of tomatoes in my kitchen. Yes, I was ever so happy to have them, but how to cope? They needed to be processed quickly before they spoiled.

I thought about the things we eat during cooler weather and made a list of tomato-based dishes or the building blocks for soups, stews and casseroles. I also bought a more efficient food mill than the one I typically use for small projects. The new one has a motor and would puree anything. At least that’s what I thought.

On day one of tomato madness, I washed and quartered half a bushel of tomatoes. A family member who shall remain nameless, volunteered to assemble the new food mill. Well, several hours later and after much frustration, not to mention damage to the new kitchen cabinets, that person left the kitchen in a state of disarray and fled. In all fairness, the diagrams for the food mill were indecipherable and there were lots of pieces, plus the motor. After considerable swearing, I managed to assemble the wretched food mill and more or less anchor it to the countertop. It wasn’t easy. I thought I was home free, ready to start processing the tomato chunks into a bowl of puree and another of skins and seeds. No — the heavy duty food mill doesn’t like to be fully loaded with tomato chunks. Its preferred approach is poco a poco.

Over the course of three days, I managed to puree all of the tomatoes. I used the basic puree to make Marcella Hazan’s Bolognese sauce; the River Café’s quick, bright tomato sauce; traditional southern vegetable beef soup; Maryland style crab and vegetable soup; and a fairly basic salsa that incorporated lots of the peppers I had grown. I thought that I had an enormous number of items stockpiled for dinners later this fall, but once again fate intervened. A neighbor showed up unexpectedly, saw the vegetable beef soup, ate an enormous bowlful, and declared it just like what his grandmother used to make. He stuck a spoon in the Bolognese sauce, tasted it, and announced that my lovingly simmered velvety sauce was perfect for topping baked potatoes. He left with several of everything. And then someone else appeared, and the scenario was repeated.

It’s all good. I like to feed people and share what I make. My only regret is that I didn’t ask my visitors to help clean the kitchen. Dealing with 120 pounds of tomatoes is messy. The puree splashes everywhere, and somehow the seeds multiply in hard to clean places. The kitchen looked like a war zone, but we now have a bounty of fresh tomato-based treats packed away for later.

Just when I thought I was done with tomato mania, someone dropped off about half a bushel of yellow tomatoes. They’re milder and make a fabulous soup or sauce for baked fish. It’s time to call those visitors back to help. Some years, even when you don’t plant much of a garden, you still have a bounty of vegetables. Life is good.

Cynthia Wood is a master gardener who writes two columns for The Herald. She can be reached at cynthia.crewe23930@gmail.com.

The gardener and the wedding: Part II

The wedding is fast approaching — Labor Day weekend. Invitations have been sent, responses have been tallied, accommodations and transportation... read more