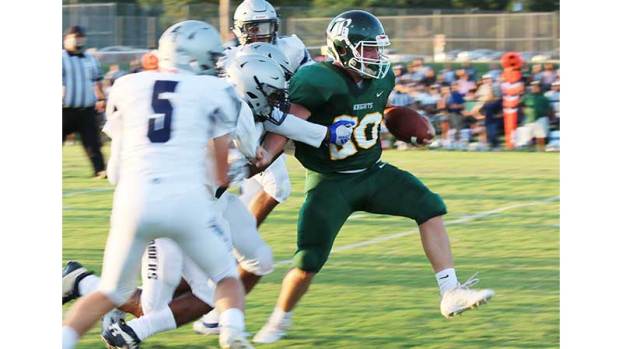 The Knights send a message

Buckingham County High School’s varsity football team made a powerful statement with its play Friday night, opening its 2019 campaign with a definitive 27-6 home victory over perennial state title contender Appomattox County High School in a matchup that has become known as “The Battle of the Axe.”

“Mainly, I’m just proud of the way these guys came into the game,” Knights Head Coach Seth Wilkerson said of his players. “… I could tell at 3:05 (p.m.), when they get out of school, that they were mentally prepared, focused on the game. We had just been working against (the Raiders) and what Appomattox does on offense, and the guys came out and executed the game plan and played well.”

The Knights had not defeated the Raiders since 2014, and between then and now, the Raiders have won three Virginia High School League Class 2 state championships. The past three years, Appomattox had defeated Buckingham by an average of 45.7 points.

After the first half Friday night, the Knights made it clear the story would be different this year. They held a 7-6 lead at the end of the first quarter, and the score remained the same at halftime. None of this made Wilkerson get comfortable against Appomattox, though.

“To be honest with you, I didn’t feel comfortable till the scoreboard said zero with the time,” he said. “We played good defense, and we were able to keep the ball on offense and get some long drives going to keep their offense off the field, and that’s one of the things we were trying to do there. I’ve always said the best defense is the offense staying on the field.”

Buckingham Athletics Director Russ Gowin noted that the Knights took control by making the most of the second half’s opening possession, generating a 12-play, 67-yard drive that lasted seven minutes, 21 seconds and made the score 13-6 when junior wide receiver Xavier Copeland scored on a four-yard run.

The Knights added two more touchdowns in the fourth quarter to seal an outstanding win in front of a large home crowd.

Sophomore fullback Dalante “Woody” Woodson helped the Knights establish key momentum in the first half before going down with an ankle injury late in the second quarter on a 41-yard run. He had eight carries for 111 yards.

Buckingham’s last victory over Appomattox — a 20-7 result in 2014 — came under the direction of legendary Head Coach Craig Gill, who died in July 2016 following a three-year battle with cancer. During his 20 years as head coach, Gill led the Knights to a 131-83 record, six James River District titles and a state championship game appearance. The Knights’ current head coach, Wilkerson, was Gill’s longtime assistant and defensive coordinator.

Wilkerson took over in 2018, leading the Knights to a 6-5 season, one which included a trip to the playoffs for the first time since Gill’s tenure.

Friday night’s victory represents the next step back to prominence for Buckingham.

“We kind of started putting it all together about midway through last season, and it’s kind of carried over in the offseason and carried over to the beginning of this season now, and I’m just proud of the guys,” Wilkerson said. “We’ve got some things we need to work on to get better at, but I think we’re off to a good start. My coaching staff, they did a great job all week getting these guys prepared and ready for this game.”

The Knights (1-0) have a bye this week before returning to action Friday, Sept. 13, at home against Goochland High School. Kickoff is set for 7 p.m.

Dukes progress on the links

The Cumberland County High School varsity golf team is a little less than four-and-a-half tri-matches into the 2019 season, and... read more