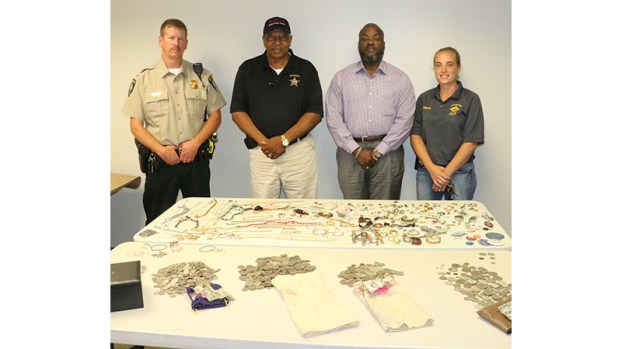 Responding to a suspicious vehicle on Miller Lake Road in August led the Prince Edward County Sheriff’s Office to recover a significant amount of jewelry, coinage and miscellaneous items, as cited in a Monday sheriff’s office press release.

The release noted that according to Prince Edward Sheriff Wesley W. Reed on Aug. 23, the sheriff’s office responded to a suspicious vehicle in the two thousand block of Miller Lake Road in Prince Edward County. After further investigation, a search warrant was obtained for a black 2000 Dodge vehicle.

The sheriff’s office recovered an unsubstantiated amount of jewelry, collectable coins, a large amount of coins/cash — including nickels, dimes, 50-cent pieces, quarters — and miscellaneous items, officials cited in the release.

The release concluded by stating that an investigation was still ongoing at the time of the release being sent out. If anyone has any information pertaining to this investigation of if they have had any of the aforementioned items stolen, contact Lt. Joseph Sprague at the sheriff’s office at (434) 392-8101.