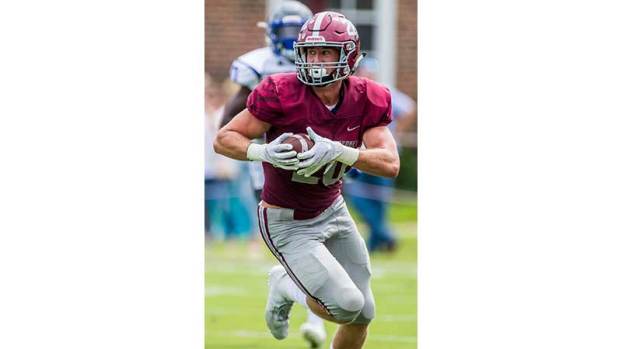 Hampden-Sydney College’s (H-SC) 2019 football team features many familiar faces on offense, including its new starting quarterback, and the Tigers appear poised to make another run at the Old Dominion Athletic Conference (ODAC) championship.

Last year, the title came down to the Tigers’ final game of the regular season against its archrival Randolph-Macon College, and H-SC ended up losing, finishing 4-5 overall and 4-3 in the conference.

Tigers Head Coach Marty Favret noted that the expectation really does not change year to year for his team.

“We expect to contend for an ODAC championship, and last year we go into the final week with the chance to win it, and if you could tell me I would be going to Macon with the championship on the line (this year), I’d take it right now,” he said during a Wednesday afternoon interview.

“But 10 starters back on offense, that obviously gives you some hope and confidence, and I think staying healthy is going to be key for us,” he added. “But a competitive conference, competitive schedule, with two real good teams to open up the season with Averett and (Christopher Newport University), we’ll find out how good we are here in about 72 hours.”

Hampden-Sydney has many returning offensive starters, but the one new starter is at quarterback — senior Clay Vick.

“He’s a familiar face because he’s been with us for four years but (is) obviously getting the chance to start his first game,” Favret said. “(He’s) surrounded by a lot of really good weapons, and he’s got a big, strong arm, but Alec Cobb was a heck of a quarterback, so we hope Clay can fill those shoes and the spotlight will be pretty bright on him, and I think he’ll be ready for it.”

The coach highlighted some of those “weapons” he expects to help Vick and the team succeed.

“Certainly, you’ve got Major Morgan, who led the country in receptions last year, preseason All-American,” Favret said of the senior wideout. “He’s as good as we’ve had here at receiver, and we’re expecting him to have a great year.”

“And then, of course, Kaleb Smith, Rookie of the Year at running back, looks great right now,” the coach continued. “(He) came into camp in great shape, so those are the two names that really stand out, but we’ve got our whole offensive line back, which is always a good sign. (We) hope to run the ball a little more consistently, and (we have) high hopes for that offense. I think we’ve got a chance to be special.

“Ed’s been slowed by a hamstring issue, but he’ll be good to go Saturday, and he’s really gotten bigger and stronger, and he’s a playmaker, and he’ll play a lot of football for us, and he’s somebody we’re really counting on,” Favret said.

H-SC’s defense returns only four starters this year, but Favret expressed optimism about what that unit will do.

“Our linebacking corps is seasoned,” he said. “Griffin Davis has been a multi-first-team all-league guy, Brendan Weinberg — those guys have played a lot of football, but our secondary is going to be young, and we’ve got some depth up front, but we need some guys that haven’t played a whole lot to step in and be ready to fill a bigger role this year. But I like our staff on that side of the ball. I think we’ve looked really good in camp.”

He said the H-SC defense has been bringing a lot of pressure and blitzes.

The Tigers open the season Saturday at 1 p.m. against visiting Averett University during Hall of Fame Weekend. They hit the road for their next two games, visiting Christopher Newport and then Southern Virginia University.

The Knights send a message