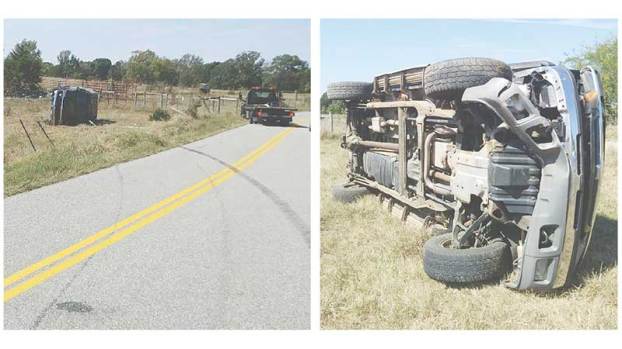 The left photo illustrates the path a pickup truck took Wednesday afternoon on Green Bay Road after the driver went off the right-hand side of the road and then overcorrected to the left, according to a Meherrin Fire and Rescue official. The vehicle overturned a single time and landed on its side in a cow pasture.

A pickup truck was involved in a single-vehicle accident Wednesday afternoon on Green Bay Road in Prince Edward County, overturning and landing on its side after coming around a sharp turn, Meherrin Volunteer Fire and Rescue Inc. officials confirmed.

Meherrin Fire and Rescue Assistant Chief Leon Scott said the driver, referred to as “D.J.” at the scene, with the last name Mayhew, was in stable condition following the accident and was transported later by her husband to Centra Southside Community Hospital.

“When we got there, she was out of the truck, and she didn’t want to be transported by EMS, so we checked her out, and she was OK,” Scott said.

Officials said Meherrin Fire and Rescue was called out to the incident at 12:47 p.m.

Scott shared his understanding of what happened, noting Mayhew was driving a Chevrolet Avalanche.

“She went off the right-hand side of the road and overcorrected, then came back across the road and overturned one time, tore down the cow pasture along the roadside,” he said. “About 25 feet was torn up.”

He noted that the vehicle landed on its side.

Asked if Mayhew was trying to avoid hitting something when the incident occurred, Scott said, “No, she came around a real sharp turn on the Green Bay Road …”