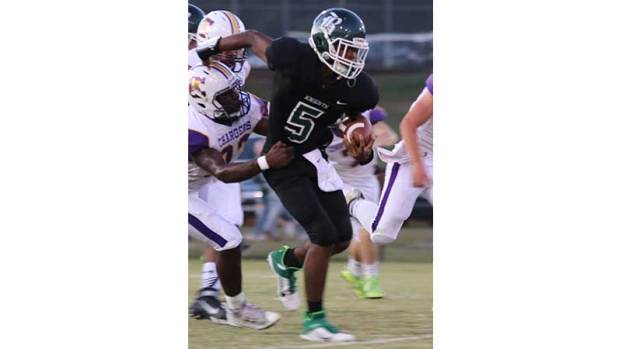 Buckingham County High School’s varsity football team pulled away early against visiting Central Lunenburg High School, taking a 21-0 lead after the first quarter and turning it into a 35-6 victory.

“I thought we came out focused and ready to play, and I was just pleased with them on both sides of the ball — and special teams,” Knights Head Coach Seth Wilkerson said. “I thought we picked it up on special teams too.”

Senior running back Walter Edwards had eight carries for 102 yards and two touchdowns Friday. Junior quarterback Gerry Toney went 2-for-3 passing for 72 yards and a touchdown, and he also registered seven carries for 58 yards.

Junior wide receiver Xavier Copeland recorded two catches for 72 yards and a touchdown, and he was very active on special teams.

“He also had five punt returns and two touchdowns out of that,” Wilkerson said.

Of his defense, the coach said, “We knew they were going to try to run right at us, and we just prepared for that during the week, and the guys just did a good job executing the game plan.”

Wilkerson was able to pull his starters right after halftime and give younger players some opportunities.

The Knights (2-1) visit Bluestone High School on Friday at 7 p.m.