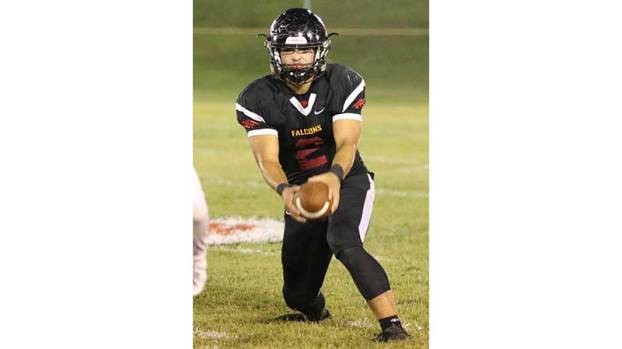 Fuqua School’s varsity football team looked like it was headed for a humbling blowout home loss in the first half of its game Friday night against undefeated Atlantic Shores Christian School, but then the Falcons showed why expectations for them are high this year.

“The resiliency of the kids, they never quit, they never gave up, and they just kept fighting, so it’s awesome to see that fight,” Fuqua Head Coach Ben Manis said. “Every once in a while, I try to give the kids what we call a Fair Weather Player Speech. So, a fair weather is essentially a kid (that) when everything is going right, man, he’s the best player out there. But when everything is going wrong, he kind of fades away. And I’m glad that we don’t have any of those kind of kids. They play for each other, they play for the fun of the game, they play hard.”

The Falcons took an early 6-0 lead, but then they were plagued by turnovers, giving up three fumbles.

“And that’s kind of what gave them short fields and all, which was really killer for us,” Manis said.

The Seahawks went up 25-6, and a lot of it had “to do with the fact that the quarterback that they had, he ran the ball very well, and he threw the ball very well,” Manis said. “And it’s really kind of the tale of the second half, because he got hit in his non-throwing shoulder, and he sat out the second half. So they kind of had to change up their game plan of what they usually do, which kind of hurt them and kind of slowed the game down for our kids.”

Atlantic Shores managed to go up 31-12 in the third quarter.

“We stifled them after that,” Manis said.

The coach noted that the X-factor in the game for Fuqua was senior Matt Osborn.

“Matt had a big game both on offense and defense as far as receiving and interceptions …,” Manis said. “He had three interceptions and one of them to seal the game at the end.”

The Falcons (3-0) host St. Michael the Archangel High School on Friday at 7 p.m.

Prince Edward County High School’s varsity football team threw aside its struggles on offense this season and charged to a... read more