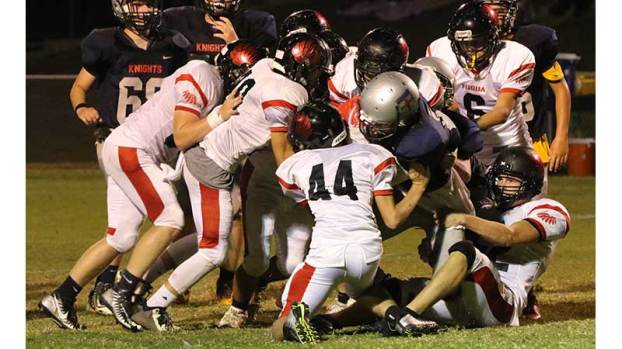 Fuqua School’s varsity football team returned to Blessed Sacrament Huguenot Catholic School on Friday for a rematch of last year’s state semifinal game, and the result was similar to that 2018 matchup, ending with a lopsided score in favor of the Falcons. This time, the final score was 50-14.

The Knights were operating this season without the benefit of a large contingent of seniors who graduated earlier this year. Meanwhile, Fuqua has quite a few seniors on its 2019 roster.

“I think it comes down to our age and experience,” Falcons Head Coach Ben Manis said, referencing what made the difference in Friday’s game.

Fuqua had developed a 30-0 lead by halftime and made it 50-7 by the end of the third quarter, but the team was not completely free of mistakes.

Nevertheless, the Falcons proved versatile in terms of how they scored, reaching the end zone on runs, receptions, a punt return and a kickoff return.

Senior wide receiver Jaylen Hempfield had a 44 yards receiving including a touchdown, and he also scored on a 75-yard kickoff return.

Able to shoulder a smaller workload in this game on offense for Fuqua was senior quarterback/running back Elijah Warner, who had seven carries for 41 yards and a touchdown, but he also returned a punt 60 yards for a score.

Junior running back Jackson Allen logged 10 carries for 70 yards and a touchdown, and he also ran for a two-point conversion.

“Jackson took a beating today,” Manis said. “… Jackson got popped several times, and he got up and kept going. He’s really matured into a good football player.”

Junior quarterback Luke Gee played some as a receiver and had nine yards receiving including a touchdown. Junior wide receiver Hayes Barton ran the ball on a few plays, finishing with three rushes for eight yards and a score.

“I think we’re kind of figuring out our offensive line, all five of those guys (are) kind of meshing together,” Manis said. “I’ve got a couple kids that hadn’t played before, hadn’t played in a while or it was the first year last year playing offensive line.”

Fuqua played without junior running back/linebacker Sean Bradley Jr., who is sidelined by injury due to a car accident, but Manis said, “We’re hoping we’ll get him back soon.”

The coach expressed pleasure at being part of a rivalry with Blessed Sacrament Huguenot Catholic that has significant history.

“These two schools have battled back and forth for ages, so it’s a good tradition to keep going,” he said.