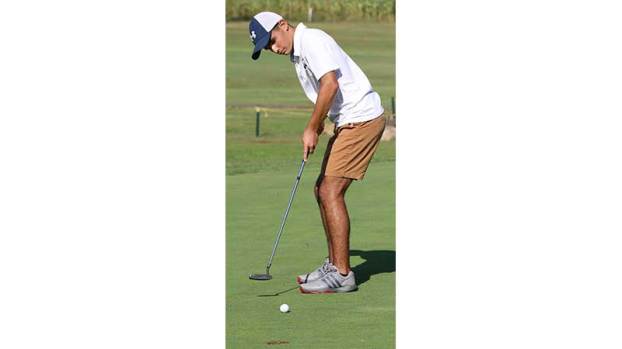 Prince Edward County High School’s Robert Raymond Jr. was the low medalist for his team Monday at the Region 2A tournament in Williamsburg, placing 15th out of 49 golfers. (Photo by Titus Mohler)

Prince Edward County High School’s varsity golf team finished a year of improvement with a solid showing at the Region 2A tournament Monday at Kiskiack Golf Club in Williamsburg.

The Eagles placed seventh out of eight teams competing, producing a team score of 423, 20 strokes ahead of Bluestone High School in eighth. King William High School won with a score of 326.

“We did pretty well,” Prince Edward Head Coach Michael Weaver said. “It was a very hot.”

The Eagles’ top individual scorer was Robert Raymond Jr., who placed 15th out of 49 golfers with an 18-hole score of 92.

“Did he feel great? Not really,” Weaver said in reference to Raymond’s self-appraisal of his performance. “In the practice round he shot a little bit better, but he did OK. I think he had a couple of bad holes that got him, but he was in the top 15, and that’s kind of like where you want to be in the top 15. That’s a little bit better than halfway, so he did make the top 15, and he was happy about that, and I was happy that he made it also.

“And some of the scores from some of the kids were a little bit higher than usual because it was just a hard day and Kiskiack is not an easy course,” the coach added.

When it comes to the challenges Prince Edward was familiar with on the links this year, “I would say The Manor (Golf Club) is probably the closest course to Kiskiack, but there’s not as many sandtraps at The Manor,” Weaver said.

Tournaments at the end of the year also present high school players with a different challenge in terms of the length of events, going from nine holes to 18 holes, but Weaver noted this change can cut both ways for players.

“It’s a double-edged sword,” he said. “It’s a good difference one way because once you get into the groove, you play a little bit better. When you play nine holes, it takes you two or three holes to settle down, and when you’re doing 18, once you get in the groove, you can kind of play your second nine better, I would think, but also, it’s a lot longer walk, and it’s harder. It’s more tiring, and these guys are out there carrying those bags on 100-degree days, it’s hard on them to do nine other holes, but they did very well. I was very impressed with all the teams the way the kids held up and finished.”

Another challenge facing golfers Monday in Williamsburg was the presence of a no-stroke limit. Weaver said that during the regular season, some players are more accustomed to playing with a double-par limit, meaning that if a given hold was four-par, the most strokes allowable was eight before the player was required to move on to the next hole.

At regionals Monday, “You could get a hundred on a hole if you had to,” Weaver said.

Weaver estimated that his team recorded five wins this year.

“We actually had a pretty decent season, better than the seasons past,” he said. “We played some good golf. We got some guys. (Senior) Lakkun Mina came in this year as a first-year player, and he improved quite a bit, and wish I had him more, but I don’t. A lot of the guys really worked.”

Mina will be graduating along with Trey Conwell, but the rest of Prince Edward’s lineup is expected to return, including Raymond.

“I’m really optimistic about next year, because we’ve had five middle school players that have been practicing with us, and we’re going to have a pretty solid team, I’m hoping, next year,” Weaver said.