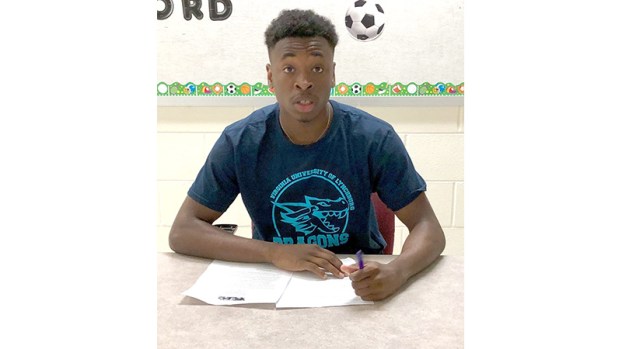 White set to run with the Dragons

Former Prince Edward County High School multi-sport standout Tajh White has put in preparation this summer and will be continuing his athletic career at the next level, running track for the Virginia University of Lynchburg.

White signed to run for the Dragons this past spring, fulfilling a key goal of his.

“I just wanted to go for a sport so that my mom wouldn’t have to pay for college, so I got a scholarship, because I had this school and a couple more schools for football that wanted me, but this one gave me the best offer,” he said.

He noted that being able to compete at the next level meant a lot to him “because I faced a lot of obstacles to get here, and I was really proud of myself (that) I made it this far.”

White’s achievement is all the more remarkable because he has only two years of track and field experience. He participated as a sophomore and senior in high school and qualified for states as a senior in the 400-meter dash.

He said he has a partial scholarship right now, but he could earn his way into a maximum scholarship.

Academically, he plans to major in business and management.

His aunt, Chakema West, said White’s next step means a lot “because, for one, out of my family, I have three siblings, and he is the first to go to college. So that is awesome for all of us.”

White thanked Eagles coaches and teammates for all of their support.

Competitive in the low 200s

Buckingham County High School’s varsity golf team features only four players this year, but the small group has made the... read more