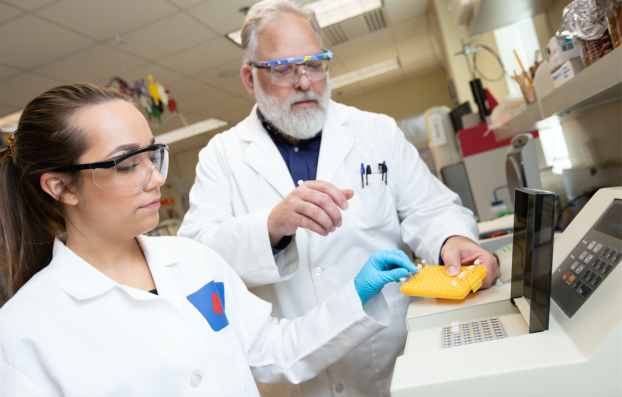 Officials in the release noted that Dooley, a biology major, is working with Dr. Dale Beach, Longwood associate professor of biology, to better understand how yeast affects the brewing process in an effort to improve the final product.

The project is part of PRISM, Longwood’s signature summer research initiative that pairs students with faculty members for eight weeks of intensive paid research work in a variety of STEM fields, the release stated. PRISM stands for Perspectives on Research In Science & Mathematics.

The release cited that the brewing-related project initially began as a collaboration between Beach and Dr. Michael Wolyniak, a biology professor at Hampden-Sydney College, after David Steeves, Third Street’s brewmaster, approached the professors with an idea.

“He said, ‘I have these yeast strains, and you are a geneticist. Can you figure out how to modify them to make them better for brewing?’” Beach recalled in the release.

Beach and Wolyniak brought the yeast strains to their biology classes in the spring semester and began the process of looking at them to understand what is happening at the molecular level, officials said in the release. Eventually the goal is to be able to change some of the characteristics of the yeast strains — which in turn would change the beer that brewers are making. Beach said this is something large breweries do frequently.

The release stated that officials caught up with Dooley to find out more about her PRISM research and what else she is doing in Farmville this summer.

Q: How did you get involved in PRISM?

A: I actually came to this project somewhat last minute. I stepped in when another student wasn’t able to continue this summer with the original PRISM project that was planned. Dr. Beach asked if I was interested in continuing a project that we started in my cell biology class, which I really liked. So now I’m expanding on that, and we’re using DNA sequencing to understand what’s happening in brewing yeast.

Q: Tell us more about your project.

A: This project focuses on how can we use genetic tools that are common in molecular biology to manipulate the yeast that is used for brewing beer. We are working with a process called flocculation. Basically, it describes what happens when individual yeast cells group together as they are grinding away, chewing up sugars and spitting out alcohol. Whether a beer appears cloudy or not is a property that is directly related to the flocculation process.

Yeast has been used as a molecular tool for decades. We are looking at certain genes that we picked from class, and we are going to sequence them and then find their variance. If we can find a gene that’s more interesting and understand its properties, then we could change the makeup within the gene later on. Our end goal is to pick a gene and change it so that a yeast strain would flocculate more or less. Then we could give the brewer a way to get what they want — giving them more control over the brewing process. It starts with understanding the genes better and understanding how they function.

Q: What’s your favorite part of your research?

A: My favorite part has been realizing that PRISM is a gift because I get to work with Dr. Beach for eight hours a day. He’s so knowledgeable and has so much experience. I’m learning so much more than I could in a regular class. I’m gaining a lot of knowledge and experience with lab techniques. It’s hard to tell students in a class what it means to do research. This type of experience is absolutely different from anything else I’ve done here. It’s night and day. I don’t have to wait a week to see what my polymerase chain reaction (PCR) result is. I’ve thought about going to grad school. This experience with PRISM has made me feel better-prepared if I do end up pursuing an advanced degree. Plus I feel a lot more confident if I were to apply to work in a lab.

Q: Have you had any success?

A: Yes, we have. First of all, we are trying to understand more about the flocculation process. It’s complicated and dynamic, and it’s really poorly understood now. We still don’t know how all of these genes are contributing to flocculation. But we’ve made strides in figuring it out so far this summer. We still have a lot more to learn.

Q: What are your career goals or plans for after graduation?

A: At this point, I’ve thought about pursuing genetic counseling as a career. You can do the front end, which is talking to people, but you can also do the back end, which is more working in a lab and doing the testing work. I like doing the lab work because it’s more hands-on. I believe that, as I move along, I’ll find something that I’m super-interested in and run with it. There are a lot of different directions that I can go. I’m doing a minor in psychology along with my biology major, which would prepare me for the genetic counseling path.

Q: On to the important questions: What is your favorite thing to do around Farmville this summer?

A: I’ve been finding a lot of different trails where I’ll walk or run. I’ve been taking the time to really explore Farmville while I’m here for the summer.

Q: What is your favorite thing to eat in D-hall?

A: Chicken salad. They also have good smoothies.

Suicide is preventable, and everyone has a role to play. No matter what that role is. Through grant funding Crossroads... read more