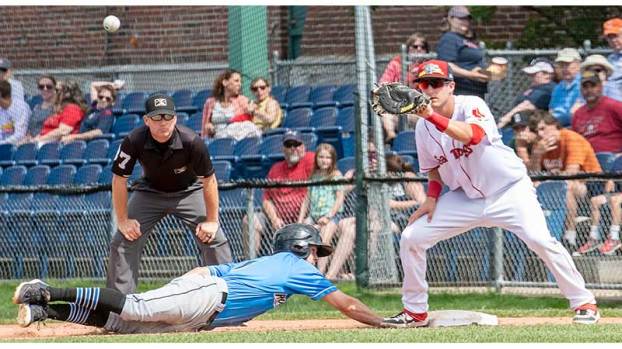 From high school baseball to the big leagues, the pitcher’s rubber to the back point of home plate measures 60 feet, 6 inches. Base to base is 90 feet in a straight line. The width of the strike zone, at least in the rule book, is dictated by the 17-inch-wide plate.

From college to the big leagues, what separates each level is not those dimensions but how fast the baseball and those manipulating it move within them. And there may be no jump more daunting for a young prospect than Single-A to Double-A, but former Longwood University standout Michael Osinski is making the most of his first opportunity at that level.

Osinski’s rise through the Boston Red Sox system continued this past week when the 2017 Longwood draft pick got his latest promotion to the organization’s Double-A affiliate Portland Sea Dogs. He is the first Lancer to reach that level since all-time Longwood great Mark Montgomery made his rapid ascent through the New York Yankees system, reaching Double-A in 2012, his second year as a pro.

Osinski is now there midway through year three, acclimating to a new normal that consists of 95 mile-per-hour fastballs and fall-off-the-table breaking balls that are as unpredictable as they are knee-buckling. That jump from Single-A to Double-A has long been considered a crucial leap for big-league hopefuls, often seen as the “proving ground for prospects,” but in the 11 days since his call-up to the Sea Dogs, Osinski has proven himself in the midst of first-rounders and top prospects.

“It’s still baseball,” he said. “You still have to see the ball over the plate and hit it.”

In year three of his pro career, Osinski continues to do exactly that. He is a career .282 hitter in the minors, doing so in 176 games since the Boston Red Sox selected him in the 31st round of the 2017 Major League Baseball (MLB) Draft. As a rotating corner infielder and designated hitter for Portland, he is hitting .258 in nine games with at least one hit in five of those outings and three multi-hit games.

In his short Double-A stint, the Vestal, New York, native has barreled up some of the top prospects in all of professional baseball. Against former No. 1 overall pick and MLB’s No. 2 prospect Casey Mize, Osinski went 2-for-3 with a pair of singles. He followed two nights later with another base hit against Alex Faedo, also a former first-rounder and a top-10 prospect in the Detroit Tigers system.

“Honestly it’s just business as usual,” Osinski said. “You just have to show up to the ballpark, and when they throw you in the lineup, you have to do your job. They moved me up here, so I just have to take advantage of the opportunity and have fun.”

That’s a mindset Osinski has carried since his standout days at Longwood when he won the starting shortstop job as a freshman and anchored the Lancers from that spot over the next three seasons under Head Coach Ryan Mau. He racked up more than 100 RBIs and nearly 200 hits in his 163 collegiate games, helped power Longwood to a 32-win season and a third-place Big South Conference finish as a sophomore and earned Big South All-Tournament honors as a junior.

And now, even though he has traded his Longwood blue for various iterations of Red Sox red, Osinski still attacks the game with that same business-like demeanor. So far that approach has paid dividends for both him and his various clubs within Boston’s system.

From his pro-ball introduction in the rookie Gulf Coast League in 2017 to his breakout at the High-A level in the second half of 2018, Osinski has proven himself every step of the way. Even this year, after suffering a broken hand in the first week of the season, he grinded his way back from a nearly three-month hiatus to reassert himself as one of the best hitters in the High-A Salem Red Sox lineup. He hit .333 in his final seven games, and by Aug. 3, he was on his way up the Red Sox ladder once again.

“They told me that Friday, (Aug. 2,) I’d be joining Portland on a road trip,” he said. “My birthday was actually on a Sunday, and I made my debut Saturday, so it was a pretty wild weekend.”

That road trip took Osinski up the eastern seaboard to Bowie, Maryland, where the Sea Dogs were in the middle of a three-game series against the Bowie Baysox. Along with his suitcase, Osinski packed his momentum from Salem and went 2-for-4 with two RBIs in his Double-A debut. He even had his own cheering section follow him to Bowie as former Longwood teammates Michael Catlin, Devin Gould and Alex Lewis all made the trip.

Osinski put on a familiar show for his Lancer brethren that night, delivering a two-out, two-run double to lead Portland to a 4-1 win that night. He hasn’t stopped hitting since. Now entrenched in the middle third of Portland’s lineup, Osinski has belted two doubles and a triple, driven in five runs and helped Portland to a 5-4 record since his arrival.

Portland has three weeks left in the regular season, giving Osinski just more than 20 games to prove himself in his newest pro-ball environment. He notes that staying in Double-A until the end of the year is not guaranteed, nor is another promotion down the road. However, even as a Lancer he demonstrated his uncanny ability to make necessary adjustments, and for that he credits his day-to-day focus on the game.

“For me, it’s just about going about my business, and whatever happens happens,” he said. “If I stay here, awesome, but if I go back down, I’ll just do my thing down there. It’s just day-by-day, and you never know when your last chance is going to be. But no matter where I am, I get to go to the ballpark every day and do what I love.”

‘The swings look good’ for the Dukes