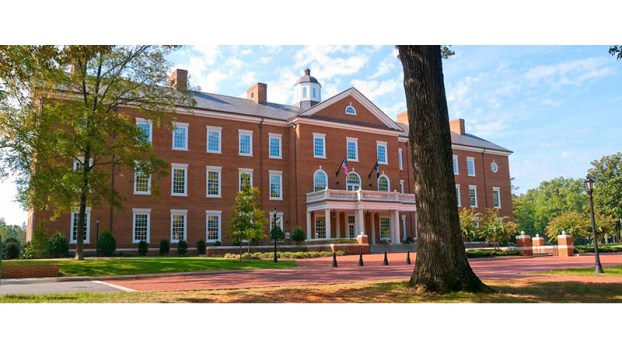 Hampden-Sydney College’s Bortz Library is ranked fifth on the Best College Library rankings list in the 2020 edition of “The Best 385 Colleges” by The Princeton Review. Bortz was ranked No. 18 last year.

The Princeton Review has once again named Hampden-Sydney College (H-SC) as a top college in its 2020 edition of “The Best 385 Colleges,” an H-SC press release highlighted Aug. 7.

Officials noted in the release that in addition to H-SC’s selection as a top college, the school’s library, Bortz Library, has been ranked fifth on the Best College Library list — up from 18th last year. Since its opening in 2007, Bortz Library has consistently been listed as one of the best in the country.

The college also appeared in The Princeton Review’s “Best Value Colleges,” released in January, naming H-SC’s alumni network fourth in the nation — up from fifth nationally the previous year, the release cited. And Hampden-Sydney’s career preparation continues to earn top rankings, with The Princeton Review ranking the college in the top 20 schools for internships.

The release stated that The Princeton Review chooses the colleges for rankings based on data collected annually from administrators at hundreds of colleges addressing their institutions’ academic offerings. The company also considers data it gathers from surveys of college students who rate and report on various aspects of their campus and community experiences.

In their survey responses, H-SC students praised the college’s faculty, with professors receiving a 96 out of 100 for accessibility, the release highlighted. Students note that the college “excels in imparting (to) its students the ability to think critically,” and if a student “is willing to accept a challenging road, he will be rewarded.”

But Hampden-Sydney is more than its rigorous academics, officials shared in the release. Although education remains a top priority, life on the Hill offers plenty of social opportunities, from intramurals to outdoor programs. One student proclaims that the student body is “a brotherhood rather than a group of peers.”

The release concluded by stating that perhaps that’s why Hampden-Sydney College “really is unlike any other school out there and any student here will back that up.”

A look back at the beginning