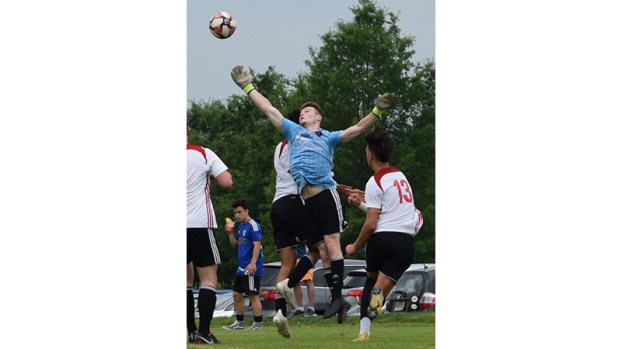 Longwood University Men’s Soccer Head Coach Jon Atkinson unveiled a group of 12 newcomers this week set to join the program prior to the 2019 season. The group, which includes goalkeeper Jeff Gates, pictured at left, features players from four different U.S. states and six countries across the globe, including Anguilla, Denmark, Germany, Hong Kong and New Zealand.

With preseason training set to begin this week, Longwood University Men’s Soccer Head Coach Jon Atkinson unveiled a group of 12 newcomers set to join the program prior to the 2019 season, as highlighted in a Longwood athletics press release.

Officials in the release noted that Atkinson brings in a diverse group representing four different states across the U.S. and six countries across the globe, including Anguilla, Denmark, Germany, Hong Kong and New Zealand. The group consists of four players from the Commonwealth of Virginia, as well as players across the U.S. in Connecticut, Florida and Maryland.

The 12-player class is composed of a pair of transfers and 10 freshmen, as Atkinson looks to replace four players that started five or more games a season ago, the release stated. Longwood opens its preseason slate at the Longwood Athletics Complex on Saturday, Aug. 17, as the Lancers welcome Virginia Commonwealth University for a 7 p.m. start.

Following are the summaries provided in the release on each of the 12 new Lancers:

Ayokunle on choosing Longwood: “I felt that the school and the team were the best fit for me.”

An All-State and All-Metro forward, who posted 20 goals, 20 assists in his final two high school seasons at Meade, Ayokunle will bring depth to the Longwood forward group. At Longwood, Ayokunle plans to pursue a degree in computer science.

“Tosin impressed us with his hunger for the game,” Atkinson said. “He’ll look to help the forward line and pitch in with some goals. His athleticism will cause problems for our opponents.”

Carr on choosing Longwood: “I chose Longwood because I thought this school would give me the biggest opportunity to grow both as an athlete and as a student. Coach Jon (Atkinson) sold me on his program the day I stepped foot on campus, and I’m excited to see how I can fit into this program and hopefully make a huge impact.”

Carr comes to Longwood on the heels of a decorated high school career highlighted by First-Team All-District, All-Region and All-State honors in his sophomore and senior seasons. In a career that saw him score 57 goals in two seasons, he capped his career by scoring 41 goals and adding 11 assists en route to break the Chancellor record for goals and points in a season en route to United Soccer Coaches All-American honors. In addition, he spent part of his junior season with Richmond United, where he played 33 games, scoring three goals as a midfielder. At Longwood, Carr plans to pursue a degree in business administration.

“What stood out to us while recruiting Eli wasn’t just his ability and craft but his engine,” Atkinson said. “He’ll work tirelessly for his team and will fit our system well as we look to inject some quality into the final third.”

Caspar on choosing Longwood: “I chose Longwood in order to study at a premier university, along with the opportunity to play soccer at a high level.”

Paul Caspar joins the Lancers as a transfer from soccer powerhouse UCLA where he helped the Bruins to a 10-win season and an appearance into the NCAA Tournament.. The Solingen, Germany, product appeared in two games as a freshman in 2018. Prior to his time at UCLA, Caspar played the bulk of his youth career for VFL Bochum while also playing one season with RW Oberhausen in his native Germany.

“As a transfer, Paul is already equipped to the collegiate game and will compete for the left back position right out of the box,” Atkinson said. “His quality on the ball and professionalism will be a key ingredient to our back line and the possibility to unite with his fellow German, Jonas who plays alongside.”

Gates on choosing Longwood: “It has a family-oriented environment and feels close to home even though it’s three hours away.”

The brother of current junior midfielder Justin Gates, Jeff Gates adds depth to the goalkeeper position. A team captain at Tuscarora from 2016-18, Gates finished second-team All-District and was honorable mention All-Metro. At Longwood, Gates plans to pursue a degree in kinesiology.

“Jeff will joining his brother at Longwood,” Atkinson said. “He’s a very accomplished goalkeeper that will add depth for us.”

Hinge on choosing Longwood: “It’s a perfect combination between education and my passion that is soccer.”

A product of Holstebro, Denmark, Hinge comes to Longwood to strengthen the midfield. He played his youth career for Silkebrog IF, along with Holstebro B in his native Denmark. Hinge plans to pursue a degree in kinesiology while at Longwood.

“Filip’s pedigree on paper is impressive and the type of player who will translate to the American game very well,” Atkinson said. “Typically an outside midfielder Filip is a quality footballer who could adapt to many positions where the team needs him best.”

“Adam has impressed the staff with his character, and we have no doubt he will fit in well,” Atkinson said. “A product of the famed Monte Verde Academy, Adam has all the tools to grow into a formidable full back. Plenty of pace, excellent engine and has been taught the speed of play needed to be a success at this level already.”

King on choosing Longwood: “I chose Longwood because it’s a university that cares about their students.”

A first-team All-State and All-Region performer and team captain at Deep Run, King finished his high school career among Deep Run’s top three in assists after securing a combined 31 in his final two seasons. As a senior, King scored 10 goals and added 17 assists en route to being named Team MVP and adding first-team All-Metro honors to his resume.

“Austin has had an excellent high school career and will look to carry this on in college,” Atkinson said. “Predominantly a winger, Austin has pace and goal scoring ability which are always welcome. We’re excited to have another local product compete at our institution.”

Lake on choosing Longwood: “It has good facilities and a great staff. It was highly recommended by a former student.”

A junior transfer from Crowder College, Lake started 11 of 13 games played a season ago for the Roughriders backline and helping his team to four shutouts and 11 wins a season ago. The Anguilla native, Lake was a U20 national team captain and was a 7A West All-State Team performer at Fayetteville High School in Fayetteville, Ark.

“Tyrique is a central defender with bags of athleticism and is already accustomed to the collegiate game,” Atkinson said. “He’ll look to add competition to what is becoming a very strong defensive outfit.”

Meehan on choosing Longwood: “The coaches made me feel comfortable, taking me in like family from the get go. The campus is a perfect size for me and I wanted to play in a warmer climate.”

Meehan will add competition to Longwood’s backline, earning all-conference accolades in three of his four seasons at Saint Joseph High School. He became the first player to be named All-Conference in his freshman and sophomore seasons while also being named Team MVP and Team Captain in his senior season. On the field, Meehan scored 28 goals and added 31 assists throughout his four seasons. At Longwood, Meehan plans to major in political science.

“Sawyer is a high caliber guy with a drive and desire to succeed both on and off the pitch,” Atkinson said. “He’ll look to add competition at the left center back role and use his first year as a platform for growth. Sawyer captained his travel team and as such has some leadership qualities that will help the squad grow as seasoned Big South competitor.”

Plimmer on choosing Longwood: “I loved the campus vibe and the soccer coaching staff.”

The top goal scorer during his senior season at Mount Aspiring College with eight goals, six assists in 10 games, Plimmer will look to add depth in the midfield for Longwood in 2019. Plimmer guided his school to a program-best third-place finish in its tournament. In addition, he played eight games for the Wanaka men’s premier team where he scored three goals and added five assists.

“Alex came to our ID clinic and I came away immediately impressed,” Atkinson said. “He’s a very disciplined player who has a good football IQ and fantastic work rate. Alex will add competition in the midfield and is the type of player that has the tools to succeed in the Big South.”

VanSlyke on choosing Longwood: “It has a good family environment and is a very tight-knit community.”

After joining the Lancers in January and training throughout the spring, VanSlyke is set to begin his first full season. The Spotsylvania native finished his senior season as first-team All-State, All-District and the Conference Player of the Year after scoring 24 goals and adding 10 assists. In addition, VanSlyke played his sophomore and junior seasons on the Fredericksburg NPSL team. An honor roll student throughout high school, VanSlyke is pursuing a criminal justice degree while at Longwood.

“Leif is a tough, hardworking lad who has a heart and hunger for his team’s success,” Atkinson said. “He has excellent character and disposition and is already an integral part of our squad after joining this past January.”

Wong on choosing Longwood: “I really enjoyed the campus and the friendly community. The team competes at the Division I level which can help me improve and learn more about the game.”

Nathaniel Wong joins the Lancers after helping Millfield to a combined 32 wins in the last two seasons. Wong, a native from Hong Kong, adds depth for the Lancers in the attacking and defensive midfield areas. He served as a team captain of a Millfield team that had a combined plus-88 goal differential in the last two seasons. In addition, Wong has represented his native Hong Kong at the national level with the U18 team.

“Nate is another player who has exceptional work ethic,” Atkinson said. “An efficient player who will connect the dots and do a shift on the defensive end adding further competition for spots in the middle of the park.”