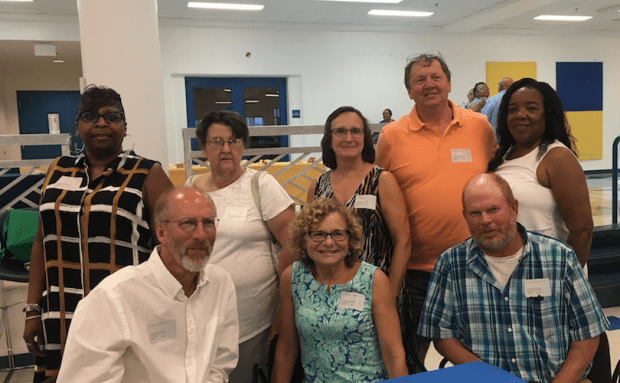 Over 250 former students and teachers gathered at the school around 4 p.m. and were welcomed by the Reunion Committee. After an hour of getting reacquainted and enjoying seeing many former classmates, those present heard from superintendent, Dr. Amy Griffin, who welcomed them to the school system. Following her remarks Dr. Jeffrey Scales, a former principal of the school and present member of the Foundation Board addressed the group. Dr. Scales told the group that the Cumberland County Public School Foundation was established in 2001 as a 501(c)(3) nonprofit organization that provides a channel for individuals, businesses, and foundations to make tax deductible gifts to the Cumberland County public school system.

This year, the Foundation has given 39 scholarships to 25 students for a total of $33,650, its highest total ever. To date the Foundation has given a total of $127,734 in teacher grants and $342,950 in scholarships to Cumberland High School graduates. This is a grand total of Foundation giving of $470,684. In addition to the donors, Cumberland County citizens and surrounding counties have shown a commitment to this cause as well by participating in several activities held during each year which includes: the Annual 5K Run, the Walk for Education, Praise Celebrations and now hopefully an annual reunion.

Those present enjoyed listening to music from different decades which was provided by DJ Kevin Ingle who is a 1981 graduate of Cumberland and the meal was prepared by the school cafeteria staff under the direction of William Brandt. The food was delicious and enjoyed by all who attended.

One of the former students, Claudia Dowdy Reed, brought a scroll for all who were there to sign and gave it to Barbara Gamage, who was instrumental in getting the reunion together. The Foundation members asked for help with funds for scholarships and grants from the group and help with locating more of the students and teachers from past years.

Those in attendance came from California, Florida, Tennessee as well as many from around our state of Virginia. They ranged in age from the Class of 1948 to 1995. The group will begin planning an annual alumni dinner for the summer of 2020.

Welcoming students back to school

Smiles were abundant at Buckingham Primary and Buckingham Elementary schools Wednesday morning as students were welcomed back from summer vacation... read more