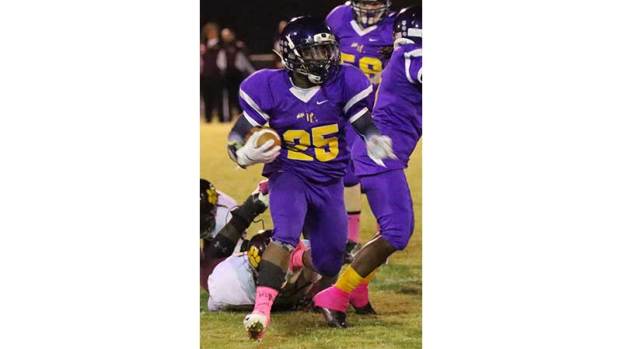 Former Prince Edward County High School star running back J’Sean Dupuy is training as a receiver for Ferrum College in advance of his freshman season. (Photo by Titus Mohler)

Dupuy preps to play for the Panthers

Former Prince Edward County High School football standout J’Sean Dupuy is in the midst of preseason preparations for beginning his playing career at Ferrum College, the school he signed with back in the spring.

He said he reported for preseason training Aug. 14, and he is already dealing with some change. A star at the running back position for the Eagles, he is transitioning to receiver for the Ferrum Panthers.

Dupuy took a moment in between practice sessions this week to reflect on what it meant to him to be able to sign on the dotted line and continue his football career at the next level.

“It felt amazing,” he said. “I felt like all my hard work paid off.”

He noted that it had been a goal of his to play college football “ever since I was in eighth grade.”

Dupuy has played football for 11 years, starting when he was 7. He said he played recreational ball in Prince Edward and then played for Prince Edward County Public Schools’ middle school, junior varsity and varsity teams.

His father, Mike Dupuy, said being able to see J’Sean move on to the college football level means a lot to him.

“I’m very happy for him and hope he succeeds in what he’s doing, which he’s starting off on the right foot, and I’m just excited for him to achieve with it,” the elder Dupuy said.

Among the other schools J’Sean Dupuy considered playing for were Emory & Henry College and Christopher Newport University.

He said Ferrum was his choice because “it was mostly a running game school, and the campus is pretty cool. It’s quiet over here.”

On the academic side, he will be majoring in criminal justice.

As for those who helped him reach the college football ranks, Dupuy gave credit to “my middle school and high school football coaches.”

Culpeper County High School Head Coach James Ford, who coached Dupuy for the past several years at Prince Edward, noted he was excited to see Dupuy sign with Ferrum.

“It was great for a guy who put so much into Prince Edward (to) get an opportunity to showcase himself at the next level,” Ford said. “Like Rah’Quan (Payne) we played and started him as a sophomore, and (he) was a mainstay for three seasons for us.”

Dupuy is once again playing alongside Payne, who also signed with Ferrum this past spring.

Ford added that Dupuy “will bring an excellent work ethic and will be ready to step into any role they want him to play. … They have an All-American right now.”

Mike Dupuy said his son called him and told him this week about moving to the slot.

J’Sean Dupuy said the transition to receiver has been smooth.

“Yeah, I’m working on running routes and stuff, trying to understand them,” he said, confirming the Panthers have a large playbook to learn.

He noted that freshmen at Ferrum play on a junior varsity team and that he will move up to varsity either midseason or next year.

By Chris Cook LongwoodLancers.com From high school baseball to the big leagues, the pitcher’s rubber to the back point of... read more