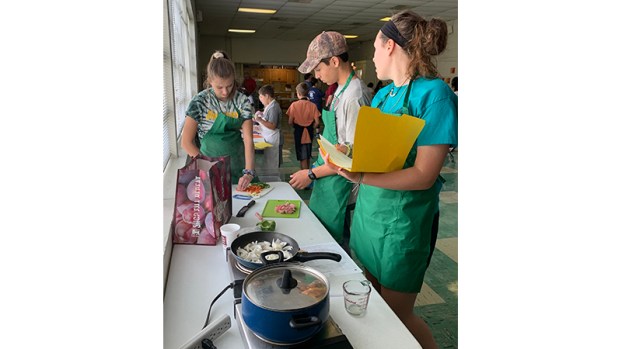 Mattie Kitchen, Matthew Keller and Kate Flanagan work on their dish for the food challenge competition.

Buckingham and Prince Edward county 4-H members attended cooking day camps at the end of summer. Even though the camps were held separately, the two counties came together one day for guest speakers about food safety and garnishing and met again at the end of the week for a friendly 4-H Food Challenge competition.

During the week, youth focused on basic cooking techniques, learned about kitchen safety, such as how to properly use a knife, turning pot handles away, etc., and food safety, such as proper internal cooking temperatures for meats and avoiding cross-contamination. They also learned about basic nutrients found in various foods and why our bodies need those nutrients.

For the food challenge competition, teams of three to five youth were given a mystery bag of ingredients and had 40 minutes to incorporate the skills they had learned during the week to create a dish from those ingredients as well as to develop an oral presentation for the judges. The oral presentation included describing the dish and how it was prepared, how the ingredients in it fit into My Plate, the nutritional value of the dish, and how many servings were in the dish. They also did a cost analysis to determine what the dish cost and what the cost per serving was. It was a daunting task but six junior and two senior teams did it with skill.

One junior team from each county and a combined senior team will be competing in the statewide Pork Challenge competition in Smithfield later this month. Both the local and state competitions, as well as other cooking workshops and contests, are supported by Virginia 4-H with sponsorship from the Walmart Foundation.

After-school cooking classes for youth will be taking place in both counties starting this fall. Contact your local extension office to find out more. Buckingham, contact (434) 969-4261 or Prince Edward at (434) 392-4246.

THE WORD: The pioneer spirit

In the New Testament, we learn that “the disciples were called Christians first in Antioch,” Acts 11:26. I have often... read more