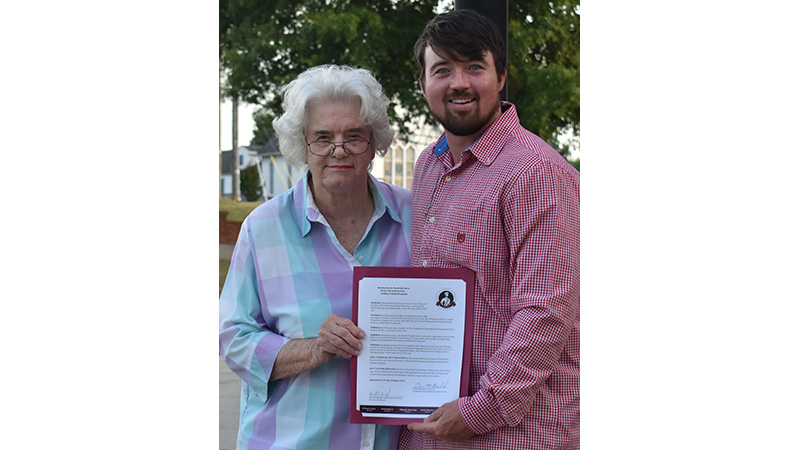 Barbara Womack, wife of Elbert Redd Womack, and Colton Hanks, his grandson, hold a resolution presented by the Cumberland County Board of Supervisors honoring Elbert Womack’s life and legacy in the county. (Photo by Emily Hollingsworth)

The life and legacy of Elbert Redd Womack was honored by members of the Cumberland County Board of Supervisors on Tuesday.

Womack, who served on the Cumberland County Board of Supervisors from 2001-2012, died on July 20.

Board Chairman David Meinhard read a resolution from the board, commending Womack’s service to the county as a board of supervisors member, as a farmer with Woodville Farm in Cumberland County and as a board member with the Piedmont Regional Jail Board and the Farmers Cooperative Board.

“Now, therefore be it resolved that the Cumberland County Board of Supervisors honors the life and records the death of Elbert Redd Womack and extends to the family its deepest sympathy,” Meinhard read during the meeting.

Elbert Womack, born in 1933, lived most of his life in Cumberland County after serving in the Armed Forces.

According to the resolution, Elbert Womack is remembered for his love of hunting, his civic and community service, and the love he had for his family.

The resolution will be kept in the county’s records and recorded in the official minutes of the board of supervisors meeting. The motion to adopt the resolution was unanimously approved by the board.

District One Supervisor William “Bill” Osl spoke fondly of Elbert Womack, saying that while there were items on which they disagreed, they remained friends.

“I can remember him, just how happy he was to be in Cumberland County,” Osl said. “He loved living here and hunting here.”

Gesturing to Colton, Osl said he remembered how much Elbert Womack enjoyed hunting with Colton.

“We wish you well in the years ahead,” Osl said to Elbert Womack’s family. “We loved Elbert. We’ll miss him, and the community will miss him as well.”

When asked by The Herald of Barbara Womack’s thoughts on the resolution, she said it was a kind and meaningful gesture by the board.

“It was very, very nice,” Barbara Womack said. “He would have been very honored and humbled to have received this.”