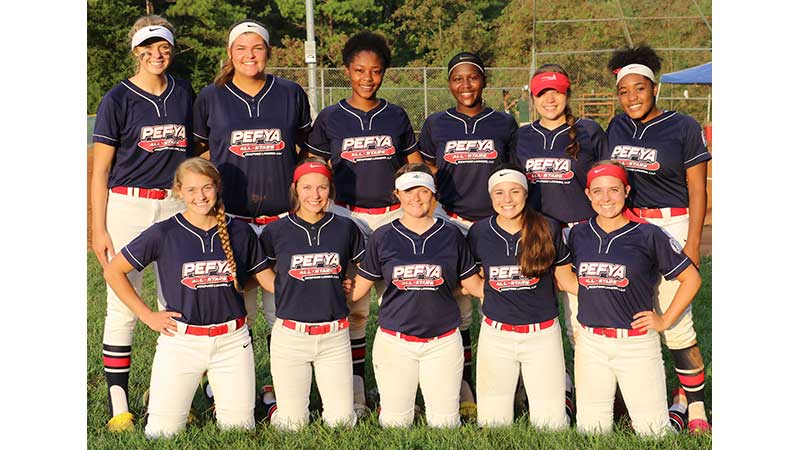 The PEFYA Debs all-star squad gathers one last time in their league uniforms for a team photo Tuesday, marking the end of what has been a historic state run for the program dating back to 2016. Several key members of the squad age out of Dixie Softball after this year, while others do not expect to return. Team members pictured are, from left, front row, Brooke Landis, Madelyn Bickford, Maddie Moreland, Gracie Hodges, Hannah-Gray Schmidt; back row, Mary Grace Amos, Caroline Seal, Shauneice Beasley, T’Asia Beasley, Sierra Wharam and SaRoya Walton. Not pictured is Abbie Schmidt, Manager David Schmidt, Coach Johnny Hodges and Coach Terry Seal. (Photo by Titus Mohler)

For the first time since 2015, a team not named the Prince Edward-Farmville Youth Association (PEFYA) Debs All-Stars will be the Dixie Softball Debs Virginia state champion.

The PEFYA girls had held the title of state champion from 2016-18, but their quest for a fourth straight title came to an end Tuesday evening with a 2-0 loss to the Amelia all-star team in the 2019 Dixie Softball Debs State Tournament in Concord.

“We just didn’t get runners on base,” PEFYA Debs Manager David Schmidt said. “We hit the ball, but we were doing long ball. We didn’t do any hard shots, and we didn’t make them field it. Every time we hit, it was long shots. They were trying to get the ball down, but everything was flying.”

He said the long-ball pop flies did not require Amelia’s outfielders to move.

“Everything went right to them, so we couldn’t find the holes,” he said.

Most of the hits that weren’t pop flies to the outfield were pop-ups to the infield that did not make the infielders work.

“We only had two runners on base the whole game, and they were stuck on second and third,” Schmidt said. “Hannah-Gray (Schmidt) put a shot down (the) third-base line and got on, and Shauneice (Beasley) did the same thing. She put a shot down (the) third-base line, and both of them were on at the same time, and they were stranded on. And that’s the way softball goes — you win some, lose some, but it’s a hard pill to swallow, especially with this team.”

Much of the team has played together for years, and this summer was considered a final run for the group as some of its leaders will now age out of Dixie Softball while others plan to embrace different pursuits next year.

Hannah-Gray Schmidt pitched the first three innings of Tuesday’s game, and Beasley pitched the final four, with both doing a good job.

“Before every game, I get my pitchers together,” Manager Schmidt said. “They all warm up, and then they help me make the decision of who’s starting. I don’t pick it. I try to let each one of the pitchers weigh in on who’s starting, who warmed up better, and all of us agreed Hannah-Gray was starting, Shauneice was coming in, and it worked.”

“(Amelia’s manager) just came up and told me he had to throw the kitchen sink at us,” Manager Schmidt said. “He knew what he had, and he had to burn his best pitcher.”

The PEFYA Debs finished 2-2 in the double-elimination state tourney, and though they struggled at times, they did put together a performance in one game that showcased what they were really capable of.

“It’s a good group of girls, and all of them can hit,” Schmidt said Tuesday. “Last night we proved it.”

On Monday evening, the PEFYA All-Stars played well from start to finish in a 25-5 rout of the Prince George all-star team.

“Tonight’s the first night we’ve actually come alive with the bats,” Schmidt said Monday. “Overall, the way we played tonight was the team that I was expecting to be here the whole tournament. Pitching was good. We were going to go two (innings), two (innings) and two (innings) the rest of the tournament with the pitchers, but we didn’t have to. Sierra (Wharam) was doing great on the mound. Hannah-Gray came in, pitched good on the mound. All the girls’ bats were working. Everybody was hitting the ball and was very patient, so I’m very proud of all of them.”

Wharam hit a three-run home run and a triple, and Caroline Seal hit a solo homer amid multiple hits.

“Hannah-Gray was hitting really strong down the line,” Schmidt said. “Madelyn Bickford, she hit every time; she had one good slap and then two good hits. SaRoya Walton had a good slap and a good hit.”

The manager praised Walton and Bickford for being slappers that can hit the ball in crunch time.

“They usually come through, so we switched the lineup a little bit tonight, and had T’Asia (Beasley) behind SaRoya, because if SaRoya slaps and gets on with her speed, T’Asia can knock her around,” he said. “So we kind of went away from having a stacked top of the lineup to having everybody throughout, and it worked better.”

He noted that Bickford and Schmidt also hit triples along with possibly more players on the roster.

On defense, he highlighted Seal at catcher for being “a beast behind the plate, and she can throw them out from her knees.”

After PEFYA had built up a sizable lead, Manager Schmidt began to move his players around significantly on defense.

“Every girl on this team, if I ask them to go play a position, if they’re not really keen on it, they still go do it, and they’ll smile about it, and won’t say, ‘You don’t want me there,’” he said.

Schmidt said Tuesday that he will remember his team as fighters on the diamond with an extraordinary ability to stay unified.

Of the squads he has coached, “this is the only team that when they come off the field, between every inning, they don’t argue,” he said. “None of the parents argue. And they help each other pick each other up. … I’ve never heard an argument between these girls. That’s the dynamic that I love about this team.”

Across the past four years, the PEFYA Debs All-Stars have produced a remarkable 17-3 record in the Dixie Softball Debs State Tournament.