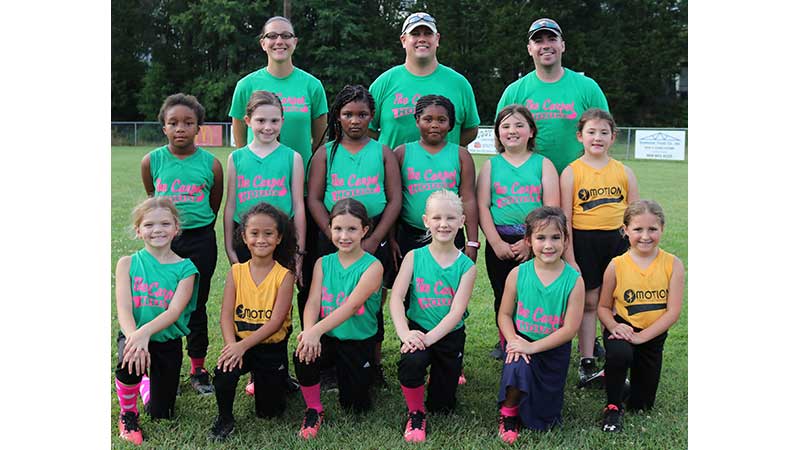 The Prince Edward-Farmville Youth Association (PEFYA) Darlings all-star team may have gone 0-2 in the 2019 Dixie Softball Darlings District 1 Tournament, but the girls demonstrated clear development on the diamond and also earned the tourney’s sportsmanship award.

“I was just really pleased with the growth that I saw from this group,” PEFYA Darlings Manager Will Showalter said. “A lot of the girls on this team were also on the team last year. This year we went into the tournament and played two really highly competitive games against two evenly matched teams.”

In their first game of the Clarksville-based event, the PEFYA All-Stars only narrowly fell to the Crewe-Burkeville all-star team, 10-9, on June 21. The next day, PEFYA faced the Blackstone all-star team and was again competitive in what ended up being a 15-11 defeat.

“The first game against Crewe came down to the last inning, and they beat us on a walk-off in the bottom of the fifth,” Showalter said. “And in the second game, we were down (against) Blackstone and fought back to within four in the last inning before we eventually ended up losing that one. So I was really pleased with the way the girls fought.”

Alluding to the age range of the Darlings division, he noted his team featured “a pretty equal distribution in terms of age this year. We had a good mix of the 7- and 8-year-olds.”

The Prince Edward-Farmville squad was announced as the sportsmanship award winner at the end of the tourney.

“Really, for the kids to show the kind of heart they played with and also to end up winning that sportsmanship trophy, I can’t really ask for much more out of that group than what they gave me,” Showalter said.

He cited that the umpires vote on which team receives the sportsmanship honor.

“It really encompasses our whole team, coaching staff, fan interaction with the umpires — it’s something that the county, in general, can take a lot of pride in that our team and everything went down to Clarksville and represented the county very well and came away with that trophy, which is an important trophy,” he said. “We may not have gotten the championship, but we came away with something equally as important.”