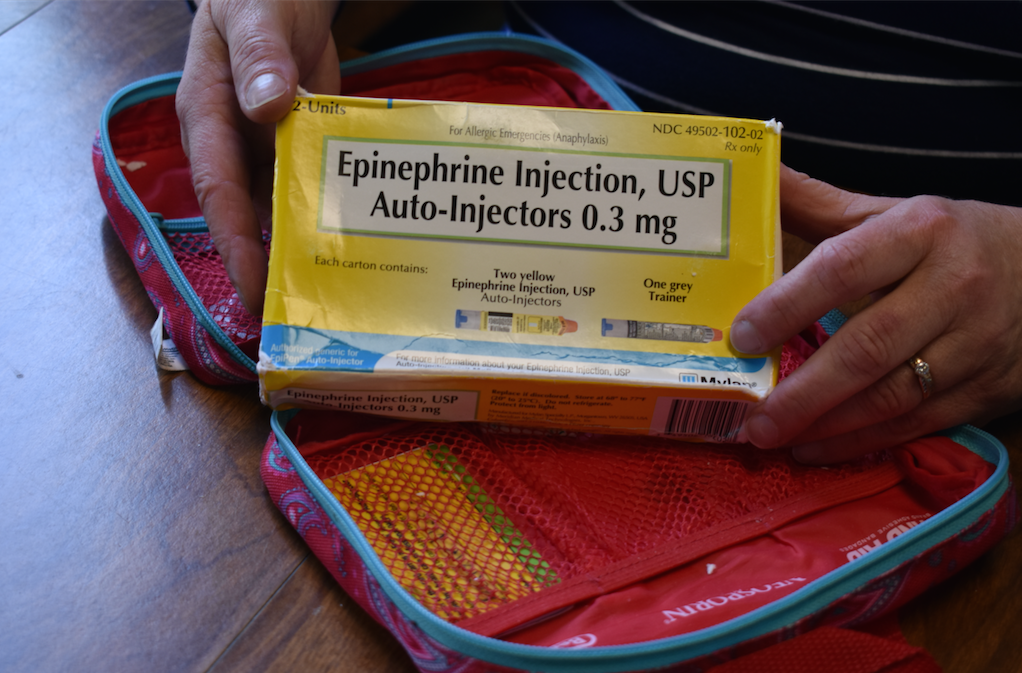 EMILY HOLLINGSWORTH | HERALD Farmville resident Deidre Westerhoff shows her medical bag, which includes epinephrine and other supplies in an event of an allergic reaction due to her alpha-gal, a condition she has had for nine years.

It’s started with steak, dairy, or a piece of sausage.

A growing number of people in the Heart of Virginia have reported unexplained allergic reactions from these products, reactions that were later connected to a molecule found in meat and meat-based substances.

Alpha-gal is a condition that is rapidly gaining prevalence in the Heart of Virginia.

The condition is believed to be spread by tick bites.

Centra Southside Community Hospital will be hosting a luncheon and information session on alpha-gal, scheduled for Thursday, June 27, 1 p.m. at the hospital. Participants can register at (434) 315-2445.

Dr. Bikram Bal, gastroenterologist with Centra Health, said the tick can transmit an antibody that causes the individual to become resistant to galactose-alpha-1,3-galactose (alpha-gal), a oligosaccharide, or molecule present in mammalian meat.

Exposure to alpha-gal causes the person diagnosed with the condition to have a series of allergic reactions, some life-threatening.

“Every time you eat mammalian meat … whether it be deer, pork, beef, rabbit, any of that, your body has an immune reaction,” Bal said.

“We are seeing people get anaphylactic reactions where they need epinephrine,” Bal said. There are also people with symptoms that include abdominal discomfort, bloating, nausea, vomiting and diarrhea.

“I’m not even taking into account the medical center, the other doctors,” Bal said.

Bal said because the range of symptoms are mostly gastronomical, he sees a large volume of alpha-gal patients at his office.

People are tested for alpha-gal via a blood test, which determines whether or not people have the antibody that causes the allergic reactions.

Bal said there are things that people can do before going to a doctor to determine whether it’s possible they have the condition.

“If they are having some of these symptoms, they can start watching their diet, and if they feel that their symptoms are worse whenever they are eating mammalian meat that could give them a clue,” Bal said.

Bal said a common misconception of alpha-gal is that people only need to abstain from beef. He said pork, deer, rabbit and other meats also contain the molecule.

He said most people with alpha-gal only eat chicken, turkey and seafood.

Because the condition is believed to be tick-based, he recommended that people protect themselves against tick bites by using tick repellent, tucking pants into socks and wearing long sleeves when outdoors or in an area with a high population of ticks.

‘A TICK CAN CAUSE SO MANY PROBLEMS’

Brian Vandegrift, of Appomattox, who works for the Town of Farmville, was initially diagnosed with another tick-borne illness: Rocky Mountain spotted fever.

About a year ago, Brian became ill, having a high fever, body aches, muscle fatigue and muscle pain.

“It got to the point where I was having trouble walking, and I just couldn’t figure out what was going on,” Brian said.

He suspected Lyme disease and started looking up the symptoms online. It was when he saw the symptoms of Rocky Mountain spotted fever that he realized he might have that illness.

After reading the more serious symptoms, including brain infection, he went to the doctor and was put on antibiotics.

His blood work at the doctor tested positive for Rocky Mountain spotted fever, but that wasn’t the only surprise.

His case of alpha-gal was relatively mild, Brian said. He never experienced the symptoms that others have had, including gastronomical problems or breathing issues. As a precaution, he abstained from eating beef and pork for six months.

After abstaining for a while, Brian said he was slowly able to reintroduce beef and pork into his diet. He doesn’t eat a lot, even now, but he can eat small amounts without a notable reaction.

The condition is spread by the lone star tick, or the amblyomma americanum.

The tick has a distinct, star-shaped mark on its back. “It’s kind of weird that a tick can cause so many problems,” Brian said.

Deidre Westerhoff has had the condition for nine years. She is in the process of building a website, alphagalatoz.com, which provides all of the necessary information about the condition. She said she has sought to bring awareness about alpha-gal to the wider community.

Westerhoff has an allergy to meat-based products and products with hidden mammalian derivatives, such as glycerin and lard.

She discovered she has had an allergy to carrageenins, a thickening additive used as a substitute for fat. This can be found in anything from toothpaste, to salad dressings, fat-free cream cheese and facial serums among other places.

She described her first allergic reaction years ago after eating a steak. It started with what felt like indigestion. Hives spread across her forehead. She had to sit on her hands to keep from scratching. Her tongue itched. Then she started having trouble breathing.

Like others affected, Westerhoff said she hopes increased education will help those affected by alpha-gal.

“The word needs to get out,” Westerhoff said.

Mary Carroll-Hackett, professor of creative writing at Longwood University, said she has had the condition for seven-and-a-half years.

Her first indication that something was wrong was that she broke out in hives and started to feel her throat close-up hours after eating a piece of sausage roughly the size of a half-dollar.

After learning about the illness, she now shops in the vegetarian section of Food Lion. She grows most of her own food.

What makes alpha-gal unpredictable, Carroll-Hackett said, is that the symptoms vary widely, and that the allergic reactions aren’t immediate.

“I wear an allergy alert bracelet just in case I was ever in a car accident,” Carroll-Hackett said. “I could very well react to the things that they were using to try to save me.”

Navona Hart was diagnosed in 2017 after experiencing symptoms in 2016. What she thought were panic attacks were actually allergic reactions due to alpha-gal. It’s affected her ability to eat out, or to feel safe eating in public.

She said dairy and meat-based products have caused her to not breathe. She said she has had to be educated about meat and dairy products. Her husband cooks meals for her.

“You have to learn with this,” Hart said.

Audrey Sullivan, of Farmville, said she stopped eating meat about a year ago because something didn’t sit rightly with her when she did.

She described feeling like there was a brick in her stomach. She felt better after she stopped eating meat. After a year or so, she decided to reintroduce some meat back into her diet.

A red flag appeared when, increasingly, she became violently ill after eating meat.

Knowing some people who have had similar reactions to meat, she asked her doctor to test her for alpha-gal. The doctor in question, she said, asked why she would want to be tested, when there could be other causes.

Sullivan pressed the doctor for the test, feeling like alpha-gal could be the answer.

She was proven right when she said her blood test came back positive for the illness.

She can no longer take vitamins with gel coatings. Cross-contamination at restaurants is common, and a fear of hers. Even some chicken wings, Sullivan said, are cooked in beef oil.

Sullivan discussed alpha-gal at a recent town hall hosted by Centra. When she broached the issue, Sullivan said “the room lit up like a Christmas tree” with questions. People described their own experiences with the illness.

Sullivan is helping others in the region develop a support group for those diagnosed with alpha-gal.

Sullivan encouraged restaurant owners around the region to attend the meeting or look at ways to prevent cross contamination.

“Restaurant owners could relieve a lot of peoples’ fears of eating out,” Sullivan said.

Sullivan encouraged people to not take their symptoms lightly. If something seems wrong, pay attention.

She said the shock of the diagnosis is gone, and now she is “on a mission” to help people who may feel alone with the diagnosis.

“You have to change your whole lifestyle,” Sullivan said.