Wesley Reed announces that he will seek re-election as the sheriff of Prince Edward County for a third term. Sheriff Reed has 34 years of experience in law enforcement. 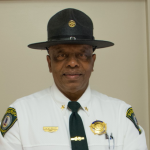 Starting as a dispatcher in 1985 under the leadership of Sheriff Gene A. Southall, he learned the roles of being a supportive component in calls for service for the agency. Reed was appointed as a field deputy in 1986 and successfully graduated from the Central Virginia Criminal Justice Academy in 1987.

Shortly after his appointment as field deputy, Reed served as an investigator for 20 years. In 2000, he became the chief deputy of Prince Edward County Sheriff’s Office (second in command) for leadership in the agency under the guidance of Sheriff Travis D. Harris Jr.

Reed served as chief deputy for 12 years until he was elected sheriff in November 2011.

Under his leadership and guidance, his staff receives state-of-the-art training for their daily work functions as well as training for specialty and career development. Agency employees have received several raises along with the creation of a rank structure with an advancement process.

Throughout his years of service, Sheriff Reed created and continues positive relationships with other local, state, and federal law enforcement as well as other community service agency. These relationships have produced mutual aid agreements, collaborative working forces and joined grantees for grant opportunities; receiving modern equipment and technologies that offers interoperability and enhancement of responses to calls for service for the community and surrounding areas.

“Our crime rate has been down by over 60 percent since 2012,” Reed said in the release. “This is due to programs and collaborative efforts that bond law enforcement and community such as the Neighborhood Watch and Highway Safety Patrol.”

Sheriff Reed’s initiatives are to continue working to improve the quality of established community service, continue improving upon working relationships within the department and with other agencies and incorporating modern techniques/technologies for the betterment of the community as well as the agency.

“I have always had an open-door policy for the citizens, our staff or any agency. Together we have explored issues that affect them personally, that affect our community and that affect our agency,” Reed said.

Reed was born and raised in Prince Edward County and graduated from the county’s public schools in 1974. He has been married to Joyce Reid for 39 years and they have three children and 10 grandchildren.

Sheriff Reed stated, “To the citizens of Prince Edward County, I seek your vote for re-election on Nov. 5. Together we will continue to enhance the safety and relationships within our community. Proven Experience Counts.”