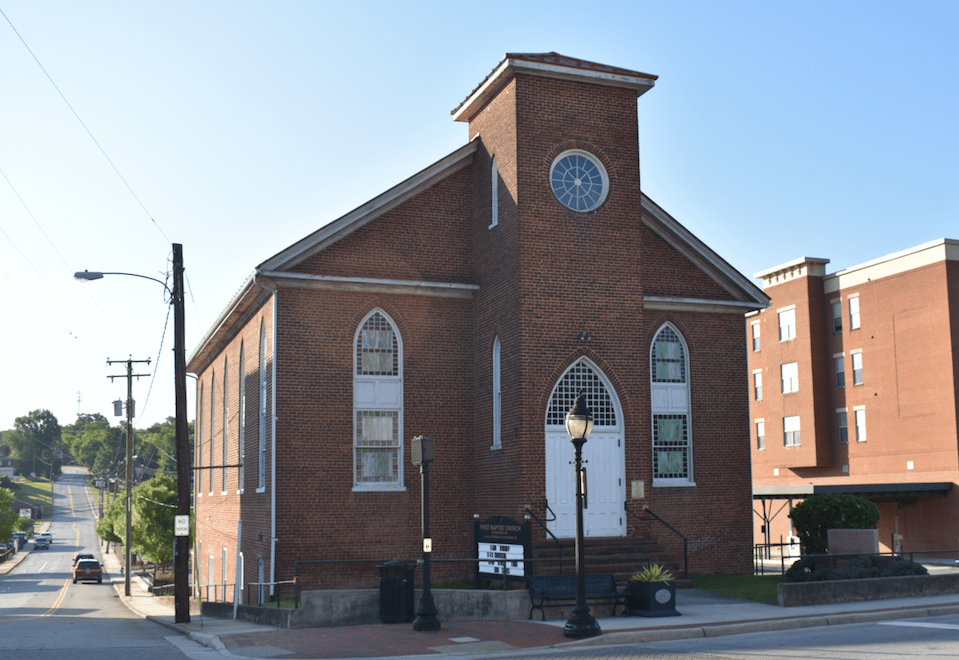 EMILY HOLLINGSWORTH | HERALD Pictured is First Baptist Church in Farmville. The church is the site of the keynote address commemorating several milestones related to Brown v. Board of Education.

Residents of Prince Edward and the Heart of Virginia will observe a series of milestones this weekend that have shaped the history of racial equity and public education in the region, and in the United States.

The series began on Thursday, 7 p.m., at First Baptist Church at the corner of Fourth and Main streets. The Rev. L. Francis Griffin was central to the Griffin v. County School Board of Prince Edward case as a tireless advocate for civil rights and was a pastor of First Baptist Church. Martin Luther King Jr. visited the church in 1962.

The keynote speaker was the Rev. J. Samuel Williams Jr., pastor of Levi Baptist Church. The keynote topic was “Backward Glancing of the Forward Marching.” A reception was held following the meeting at 9 p.m. in the L. Francis Griffin Fellowship Hall.

From 10:15 a.m. to noon at the museum auditorium, there will be a panel discussion concerning the Davis v. County School Board of Prince Edward, one of five cases included in Brown v. Board of Education. The moderator will be Moton Museum Managing Director Cameron Patterson. Panelists will include plaintiffs of the case: Floyd Bland, Joy Cabarrus Speaks and Bertha Early Shepperson.

From 12:15-1:30 p.m., a lunch will take place at the museum auditorium with speaker Longwood University History Professor Dr. Larissa Smith Fergeson, who will present on massive resistance.

A dinner and discussion on Griffin v. County School Board of Prince Edward County will be held from 6-8 p.m. at Longwood’s Nance Room of the Dorrill Dining Hall.

The parking garage code at Longwood is 3253#.

On Saturday, the Moton Museum will host a continental breakfast from 8-9 a.m.

From 9:15-11:30 a.m., a panel discussion concerning the legacy of these events will take place at the museum auditorium, with museum Director of Education & Public Programs Cainan Townsend. Panelists will include Vincent Eanes and his son, Rita Moseley and her son and Melvin Nunnally and her daughter.

Patterson said in a statement Wednesday that the events pay tribute to years of struggle and triumph that ultimately continue to shape history.

“The Robert Russa Moton Museum is proud to join with the NAACP and our local Prince Edward County Branch to commemorate important milestones in our county and nation’s fight for educational equality,” Patterson said. “Prince Edward County, Virginia, has long been on the front lines of the fight to move from an era of segregation to an era of integration.”

Patterson noted that the events being commemorated continue to have an impact into the present day.

“Over these three days we will have an opportunity to join with individuals who were on the front lines of the struggle as they share details regarding their experience. I’m also excited for the intergenerational conversations that we will have regarding the school closings and how all of these events still impact us today,” Patterson said.

Shepperson, who will speak during the Davis panel, was in 11th grade when she joined students at Robert Russa Moton High School in the walkout in 1951 led by Barbara Rose Johns. She said in a phone interview Wednesday that the walkout came unexpectedly, and it was to protest the unsafe and subpar conditions of the high school.

Shepperson said while she and her two older siblings graduated prior to the schools’ closure her younger siblings were affected.

Franklin, who will speak during the panel about school closures, was a graduate of Virginia State College, now Virginia State University, as a French major with a minor in English. She taught in Petersburg for two years before returning to Prince Edward in 1963. During that time, Franklin taught in what were called Free Schools with the Prince Edward Free School Association.

Franklin graduated from high school in Prince Edward in 1957. In 1959 all public schools shut down.

The association was developed under the administration of President John F. Kennedy and Attorney General Robert F. Kennedy.

They appointed Dr. Neil Sullivan to be the Prince Edward superintendent.

Franklin was recruited as a teacher at that time.

Franklin said the class materials, equipment and books were donated.

“This was a very exceptional year, a unique year,” Franklin said in a phone interview Tuesday.

She said she taught 11th grade English, but she said a number of the students were older due to the closure of schools.

This doesn’t include the year she taught with the Free School Association, as the state did not give teachers credit for teaching that year.

“Most of them were well-behaved because they were so happy to be able to come back to school,” Frankin said about her experiences with students at the free school. She said a few of the students were close to her own age at the time. “They appreciated that the schools reopened and that they were able to get back to learning.”

Eggleston, who will speak during the school closure panel, said he was 8 years old when he and hundreds of other students were shut out of public education in Prince Edward County. Prince Edward Academy, a private school to teach white students, was established during this time.

Eggleston was out of school for four years. He said the panel will focus on the impact that this decision had on the students and how many of them either had to move or live with relatives outside the county to receive a public education. Many of the students were unable to receive an education at all during the years 1959-1964 and sought employment.

“We would see other buses for Prince Edward Academy at that point in time riding up and down the road,” Eggleston said. “They were continuing their education, and we were just kind of goofing off.”

Eggleston said the closures were a major setback for the African-American students who were shut out of schools.

“It didn’t give us any leverage to compete in society because we were not able to get adequate education,” Eggleston said.

Eggleston said for the first two years of the closure, he helped his father, who operated a woodworking and furniture restoration business. He and other students were taught reading and math skills in churches through what he called year-round vacation Bible school programs.

His family took matters into their own hands and rented a home in Cumberland County, allowing Eggleston to attend school there.

“I was one of the fortunate ones,” Eggleston said. He went on to receive his associate degree and bachelor’s degree in 1977 and 2007 and operates funeral homes in the region. He was the first African-American council member with the Farmville Town Council and a past president of the Prince Edward NAACP.

“Hopefully one day we will all be just a part of history,” Eggleston said. “I turned the tables on it, and I think it all made me stronger. It made me determined to be all that