Earl Claude Gillispie, age 85, died at his home in Prospect, VA, gone to be with the Lord on Saturday, May 18, 2019. Earl was the son of the late Clarence Joseph Gillispie and Goldie Burley Gillispie of Farmville, VA. 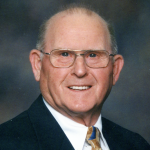 He attended school at Worsham, VA and served his country in the US Army. Earl was employed at the State Theater and Farmville Drive-In Theater for several years. He also worked at Uniroyal and retired from Winn Dixie as Seafood Manager.

A lifelong resident of Prince Edward County, Earl was a faithful member of The Church of God in

Farmville. He served in several positions within the church and was a devoted Christian.

Services are scheduled for Friday, May 24 at 1 p.m. at Shorter Funeral Home, Farmville. Family will receive friends one hour prior to service with interment to follow at Trinity Memorial Gardens.