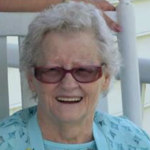 Gin was born on November 8, 1936 to Robert and Hallie Franklin of Prospect, VA. Besides her parents, she was preceded in death by her husband, John A. Nelson and four brothers, Elton, Curtis, Lawrence and Kenneth Franklin. Gin is survived by her three children, Bobby Nelson of Farmville, Cindy Owen (Wallace) of Crewe, and Lisa Kerns of Farmville.

Memorial Contributions may be made to the Prospect Volunteer Fire Department, Prospect United Methodist Church or any charity of your choice.