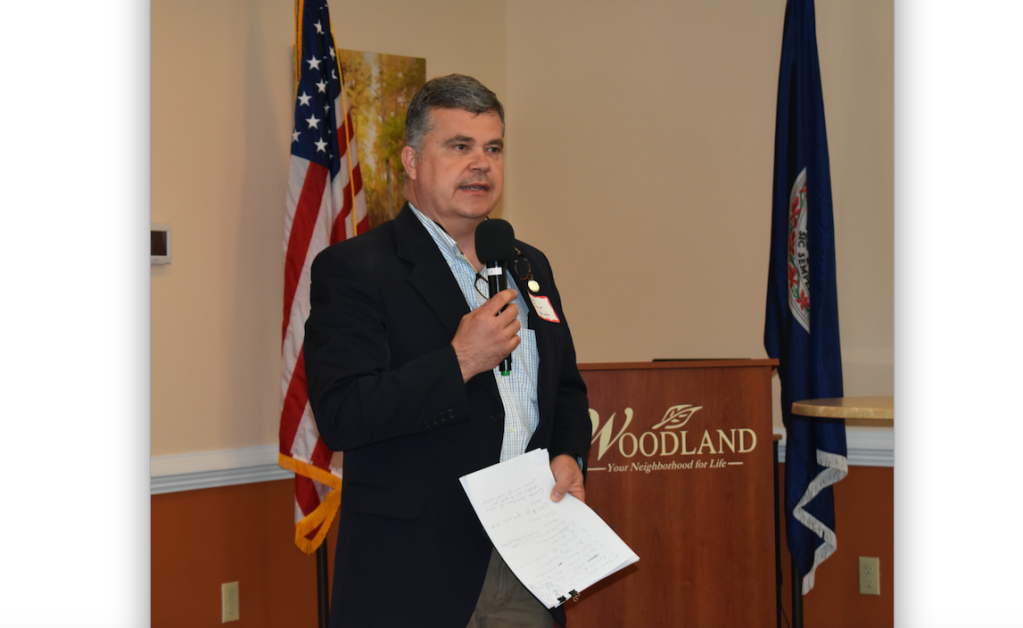 The Farmville Area Chamber of Commerce held a presentation and discussion about the 2019 Virginia General Assembly led by Del. James Edmunds Monday during a monthly luncheon meeting.

Edmunds said the general assembly saw a number of positive actions for the region, and answered questions from members of the chamber about the General Assembly. Edmunds represents District 60, which includes Prince Edward County.

Alanna Rivera, Volunteer Coordinator/Office Manager with Farmville Area Habitat for Humanity, asked about any upcoming legislation relating to affordable housing in the region.

Edmunds said initiatives to increase affordable housing opportunities are on the radar of state leaders.

House Bill 2229 was recently passed and approved by the governor, which would allow a locality to provide waiver of building permit fees and other local fees associated with construction, renovation, or rehabilitation of housing by a private-sector entity that is pursuing an affordable housing development.

A positive action Edmunds noted for Prince Edward specifically included an extension of the Enterprise Zone in Prince Edward County, which was threatened to be terminated at the end of the year.

The enterprise zone in Prince Edward goes through the middle of the Town of Farmville and stretches out on Third Street both ways. There are also zoning areas in Prospect, Rice, Meherrin, Virso and Keysville.

The Enterprise Zone program, headed by the Virignia Department of Housing and Community Development, sponsors two main grants: a job creation grant and a real property investment grant, which has the potential to help new businesses develop or existing businesses to expand.

Wade Bartlett, Prince Edward County Administrator, said during the meeting that Prince Edward has been involved with the Enterprise Zone program for nearly 20 years.

“For a rural community like ours, it’s one of our primary economic incentive packages,” Bartlett said. “It’s used a lot. We probably average $300,000 to $400,000 a year for our area businesses. The vast majority are existing businesses that use it to expand their businesses, to expand employment opportunities for our local citizens. Without that, we really didn’t have any other economic development tool in Prince Edward, and most of the rural counties.”

Edmunds spoke about a number of actions that were approved during the General Assembly. These include creating incentives in order to freeze tuition for state schools and public universities; removing the age cap for individuals with autism to receive health coverage, and appropriated a total of $23 million to broadband.

“It will be more, and it needs to be more,” Edmunds said about allocations for broadband coverage. “In my view, broadband is just as important as electricity.”

Edmunds said it’s the hope industrial hemp could reverse some of these struggles. He made it clear the hemp produced is industrial, and not recreational, such as cannabis or marijuana.

Edmunds spoke about his work to bring a bill allowing Halifax County to allocate sales tax toward building a new high school for the county, which would come at the price tag of approximately $100 million.

The bill, Edmunds said, required collaborating with numerous state officials, some of whom initially did not agree with the bill’s purpose.

He said of the eight bills he carried during the General Assembly, seven of them passed.

He spoke briefly about the effect of the controversy surrounding the Virginia government on the General Assembly. Edmunds said state senators and delegates weaved through reporters and protesters, and said that state action was often overshadowed by the news related to the governor, lieutenant governor and state attorney general.

“We got a lot done despite the national controversy, and I pray that that never happens again,” Edmunds said.

“All of that work wouldn’t have happened if it wasn’t for the relationships that you make, and that you work with, just like you all (do) here,” Edmunds said to members of the audience. “You have to work with people, and be trustworthy.”