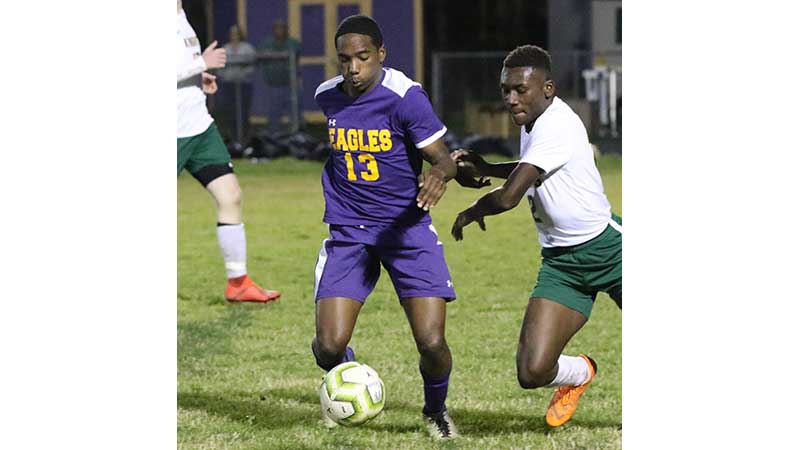 This is a rebuilding season for Prince Edward County High School’s varsity boys soccer team, but as it moves into the post-Devin Pierce era, it has the benefit of a new head coach who knows the program and the players.

Sebastian Chirila has taken over as head coach and brings experience leading the Prince Edward County Middle School team as well as coaching at the varsity level, including with Pierce.

“Last year I worked as (his) assistant coach,” Chirila said. “The two of us collaborated well, so I knew the kids coming in, and I taught some of them in class, and I know how passionate they are about soccer.”

After a 9-1 home victory over Cumberland County High School on Wednesday, the Eagles are 5-3 so far this season but have struggled with consistency.

Chirila expressed an understanding that this was going to be a season with key challenges.

“Together as coaches, our expectation was we’re going to make the best of this one,” he said. “It’s going to be a building year. It’s that transition. The seniors had Coach Pierce for two or three years, and the younger players maybe had me one or two years. I coached middle school soccer in the past as well, so I was able to help.”

However, he said the turnover in coaches at different levels has meant less consistency in coaching from one level to the next, translating into less consistent quality of play from players who are frequently having to acclimate to a new leader and a new system.

“In the past, we had a very strong middle school team as well that plays in the fall, so we had channels, and we got players that were very skilled,” Chirila said. “So far I think we have three or four players that are freshmen, they’re coming in from that middle school, but their experience is not as strong as it used to be in the past. We had Heart of Virginia at one point in time that was feeding into our program as well, but that’s before 2013.”

Despite the challenges, Chirila still has high expectations for the Eagles.

“We definitely want to be playing after Memorial Day — that’s the target,” he said.

“They are sometimes silent leaders, and I would like them to be a little bit more verbal,” Chirila said with a chuckle. “They are stepping up, they are working hard, they challenge the other kids to get up to the same level as well, same intensity.”

The coach said he and his staff are working with the trio, trying to help them find the right balance of passion and respect for the opponent, and while they can be quiet leaders, they command the respect of their teammates all over the field.

On Monday, Prince Edward battled visiting Buckingham County High School in a game that went to overtime. The Knights missed a penalty kick (PK) in the second overtime session but scored minutes later in regular play to claim a 3-2 win.

“We had an idea of how Buckingham was going to play, so we were trying to match our strategy to do the same thing that they were doing — just move the ball up to the top as much as possible,” Chirila said. “I think Buckingham was much better at executing their plan. They were trying to camp in our half, and they were just supplying ball after ball after ball … making our defense work.”

After starting the season with two road wins, the Eagles fell 5-1 in their home opener March 18 against Randolph-Henry High School. Chirila said his team was disorganized to start that game, and he saw echoes of this in its performance Monday.

“The first 10, 15 minutes (tonight) looked like the same exact game,” he said. “We were not communicating well, we were not working together as a team. So that’s why I was like, ‘Come on, people. We’re not doing another Randolph-Henry (game).’ So I saw throughout the game that we improved on strategy.”

Prince Edward scored its goals on PKs, the first shot by Rust and the second shot by senior midfielder/forward Jeffery Hilliard.

A rematch with the Knights in Buckingham closes the regular season schedule for the Eagles, who will look to avenge their first loss to the Knights in years. Chirila pointed to a key element in his team’s play that needs to change for there to be a better result in Buckingham.

“We have skill players,” he said, “and our skill players, they want (to) contain the ball, they want to dribble the ball, they want to be flashy from time to time, and it’s hard to get that mentality and say, ‘OK, you can be more effective if you move the ball faster. Rather than try to do (it all) yourself, let the ball do the work.’ We were trying to send that energy and that mentality a little bit more throughout the game, and I think we improved at one point in time, but that’s one of the things that we’re going to have to improve on to do better at their place.”