Aggressive from the start 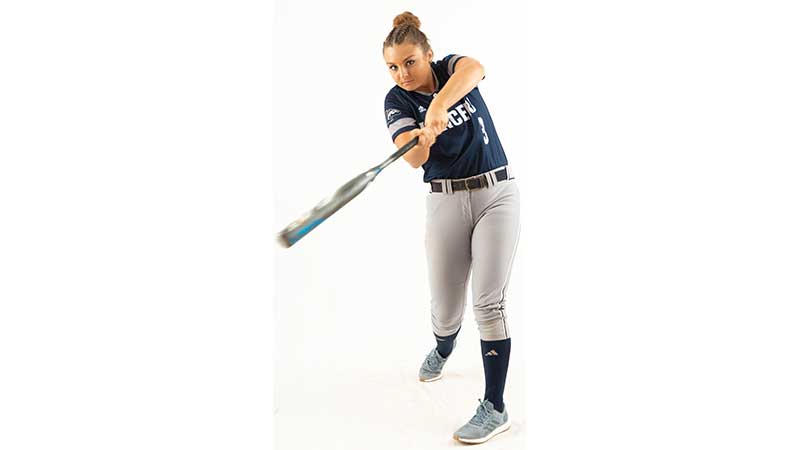 Longwood University freshman softball player Alexis Wayland is known for her aggressiveness, so it makes sense that she would gain a reputation as a key contributor for the Lancers with little-to-no delay.

Wayland has been in the starting lineup for Longwood since the beginning of the regular season, playing at third base on defense and serving most of the time on offense as the team’s leadoff batter.

On being a starter from Game 1 of the regular season, Wayland said, “It was such an honor to know that Coach Riley held me up to that standard, and coming in as a freshman, you realize a lot of (Division I) programs don’t start freshmen, so it was a big honor for her to put me out there on the field.”

At 5 feet 3 inches tall, Wayland does not have a lot of size, something which might have caused some recruiters to not seriously consider her, but Lancers Head Coach Kathy Riley and her staff focused on other distinguishing characteristics.

“When we watched her in the recruiting process, what we liked the most about her was her instinctiveness and her competitive spirit while the game was going on,” Riley said. “… I think that’s the primary reason why we recruited her, because she’s not a big kid.”

Wayland has rewarded Riley’s confidence with outstanding play, frequently proving to be an important reason why Longwood achieves wins.

Entering Tuesday’s doubleheader at Virginia Tech, Wayland led the Lancers (34-16) with eight home runs, 36 runs scored, and she is tied with senior Jordan Clark for the team-high tally of RBIs — 38.

The coach said Wayland’s experience in various sports, including a couple years of high school wrestling, has helped her to control her body and execute the right timing of different movements that leads to home runs.

“I think just doing other athletic things, and her body being in tune to those items allows you to see progress, like a small girl being able to hit it further, because Alexis still has potentially a lot more power than she already has,” Riley said. “And so I think, again, as she matures as a hitter, you’ll see her hit more home runs.”

The coach spoke on expectations she has of Wayland moving forward.

“She’s hitting about .270 this year, but I think she’s capable of hitting .300 …,” Riley said. “I think she’s just capable of maturing as a hitter in terms of probably her No. 1 skill as a hitter is that she’s extremely aggressive, and as long as that ball’s close to the plate, man, she’s up there to hit it. So I think the intelligence of the game in terms of looking for certain pitches and strike zone management, when those improve, her average will go up, and I think she’ll also hit more home runs.”

Wayland strongly agreed with Riley’s judgement about her aggressiveness.

“I love to hit the first pitch,” she said. “So when they ask me, ‘Where was the ball at?’, I couldn’t tell you. I just know that I want to hit it wherever I see it, so ‘see the ball, hit the ball.’ It also helps in defense, because if you’re not aggressive, then you have to wait on the ball, and errors occur then, so being aggressive is a big part of the game.”

This status as a home run hitter is not something Wayland gained recently. She was known for it in high school as well.

“I think my sophomore year I had tied the record with three home runs in one game, and then every year, I had a lot of home runs,” she said. “So I wanted to bring that over into the (realm of) collegiate athletics. But at the beginning of the year, I was kind of struggling with that, but I’ve picked it up throughout the end of the year.”

Because of both her ability and versatility on offense and defense, Wayland makes Riley’s life much easier.

“Any time a coach gets somebody that they can say, ‘I can plug and play that player,’ it really gives you flexibility in your recruiting to look for a girl in a different area,” the coach said. “We could really plug and play her in left, third, second, catcher — so you know that you (don’t) have a really big gap when it gets right down to it.”

Wayland has extensive experience at catcher, something that may come in handy after Lancers star senior Kaylynn “Bug” Batten graduates.

Riley said that on offense, Wayland is “definitely a big part of feeling like there’s going to be some consistency, because I know I can put Alexis as the first hitter, or I could put her as the third hitter or the fifth hitter, and she’s going to do a real dynamic job in either area that I put her, because she’s not a prototypical leadoff hitter, but what I love about it is she’s very aggressive, and from the beginning, she does not let the pitcher get comfortable.”