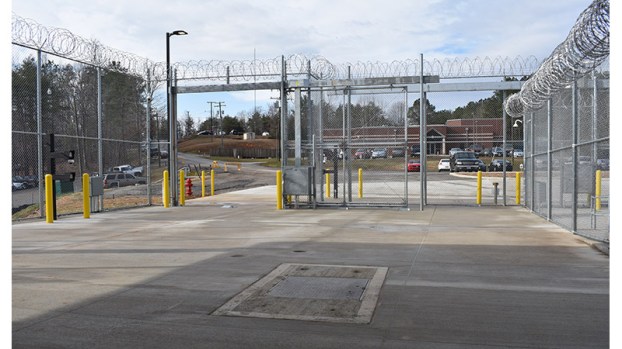 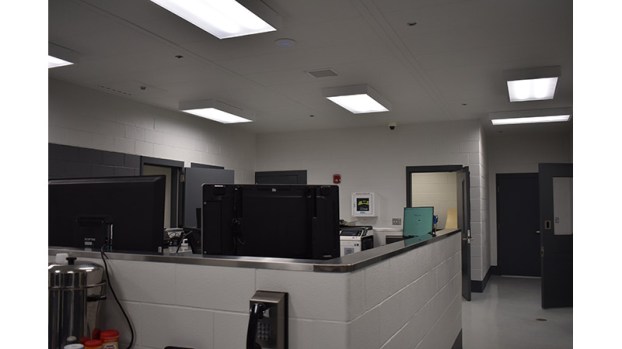 Pictured is the main area of the Piedmont Regional Jail new intake facility. Inmates are booked, receive a medical screening and temporarily stay in a cell before being moved to the main jail building. (Photo by Emily Hollingsworth)

The new building, attached to the main jail, includes a booking area where those arrested are logged in, a shower room, a medical room where inmates receive physicals and are screened for any physical and mental health conditions, and 12 cells where people stay temporarily before they are brought to the main jail building.

Prior to the facility going into operation, PRJ officials held a tour Monday morning for area and state law enforcement offices, area county administration and representatives of Longwood University and Hampden-Sydney College to learn about the new facility.

PRJ Superintendent Jim Davis said the construction of the facility was a way for the jail to meet its settlement agreement with the Department of Justice (DOJ), which began in 2013 after the Civil Rights Division of the DOJ began an investigation of the jail after being notified of numerous deaths within the jail. PRJ was released from the DOJ agreement in October 2018.

Previously, Davis said the jail did not conduct medical intakes when those arrested arrived at the jail.

“This had to be built to meet their standards,” Davis said about the facility, which took approximately 18 months to build. Jamerson-Lewis Construction out of Appomattox constructed the new intake facility. Moseley Architects was the architect for the project. Davis cited weather conditions as reasons for some delays.

Davis said the jail, when originally constructed in 1988, cost $3.6 million to hold 103 inmates. The jail has since been adapted and renovated to hold its current rate of close to 700 inmates, using open dormitories.

Davis said the shower room is wheelchair accessible, as is one of the cells to meet requirements for the Americans with Disabilities Act (ADA). There would be a health representative at the medical room 24 hours a day, Davis said.

“When they leave here, they’ve gotten everything they need,” Davis said, describing the medical screening, processing, shower and uniform.

When inmates are ready to be transported, Davis said the cells would be divided by locality or whether they are local or federal inmates. Inmates would be officially released at the main building.

“It prevents a lot of potential security issues,” Davis said.

Davis spoke about Demetrius A. Johnson, an inmate with federal charges who was inadvertently released from the jail in July 2018. He said the new intake system would prevent complications relating to processing those entering and leaving the jail.

Outside the facility, there are two separate entrances. The first allows tractor trailers and trucks carrying food and other supplies to drop them off at the jail’s kitchen and freezer, which can be accessed by the intake facility.

Davis said the new facility also houses the jail’s new water, fire suppression and electrical systems. He said the systems had to be replaced and upgraded as some of the prior systems were approximately 30 years old.