Lady Falcons walk off with win 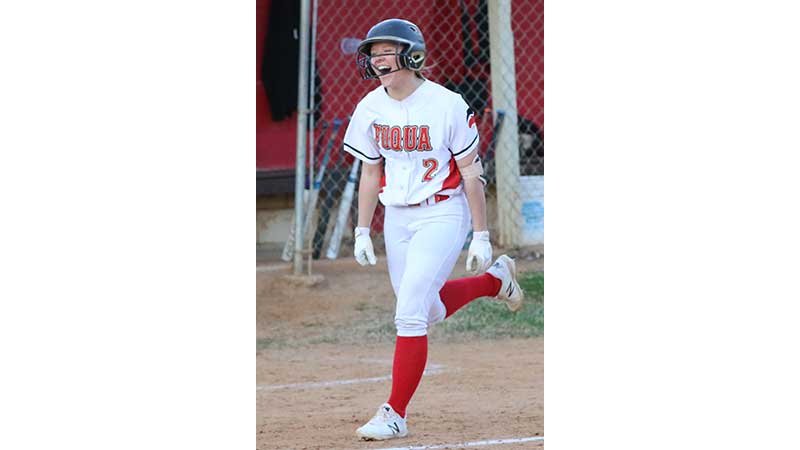 Fuqua School junior catcher Carmen Reynolds approaches home where the rest of her team awaits after she hit a solo home run in the bottom of the eighth inning to lift the Lady Falcons to a 4-3 victory against visiting Liberty Christian Academy. (Photo by Titus Mohler)

The Lady Falcons led 2-0 early against visiting Liberty Christian Academy, but then the Lady Bulldogs came charging back and took a 3-2 lead.

Fuqua was able to tie the game up, but both teams went scoreless in the seventh inning, sending the contest to the eighth.

Continuing to hold firm, the Lady Falcons’ defense set up their offense for another opportunity to win the game.

Leading off for Fuqua was junior catcher Carmen Reynolds, who had been frustrated with herself for much of the game.

“I didn’t have much confidence in myself at all given my hitting and the mistakes I made in the field,” she said. “I just kind of had to give it my all and believe in myself, and I went up there, and I was like, ‘Alright, I’ve got this. Last chance to do it.’”

“She did a great job,” he said. “She was down 0-2 and worked that count to full count, squared off a foul ball, so my feelings started changing. I knew that girl was going to come in there, and I was just hoping Carmen would square the ball up, which she did.”

Reynolds hit a walk-off solo home run over the center field fence to give her team a 4-3 victory.

She recalled the ball’s path on that final play from the pitcher to the plate.

“Seeing it out of her hands, I could kind of tell it was going to be right down the middle, so I knew I had to pull the trigger on that one for sure,” Reynolds said. “I just had to give it my best shot, really.”

Ware’s hit was a two-run homer in the first inning. She also pitched the entire game, throwing seven strikeouts.

Ford said he was proud of his team and the win against a good Liberty Christian team.

“I felt we made a lot of mistakes through this game — our approach hitting, some missed plays, Regan wasn’t as sharp as she normally is,” he said. “But to win the game, it’s a big win. I told the girls I was real proud of them. When we can play not our best and beat a good team, and it takes a big swing to do it … I was real proud of them. I told them we have a lot of work to do, but we’re going to build off this win. This is one we can reach back and say, ‘We were down 3-2 in the sixth, and we managed to score a run with two outs to tie the game.’”

Bickford recorded a hit that scored Ware to tie the game, 3-3.

The victory takes the Lady Falcons to 2-0 on the year, as they look to defend the Virginia Independent Schools Athletic Association Division III state championship they earned last year.

Fuqua had been set to visit Temple Christian School on Monday, but that game ended up being rained out.

The Lady Falcons’ other victory came in a rematch of the state title game, as Fuqua again defeated Kenston Forest School, this time by a score of 10-8.

Fuqua is set to visit Nansemond-Suffolk Academy on Saturday at 11 a.m.