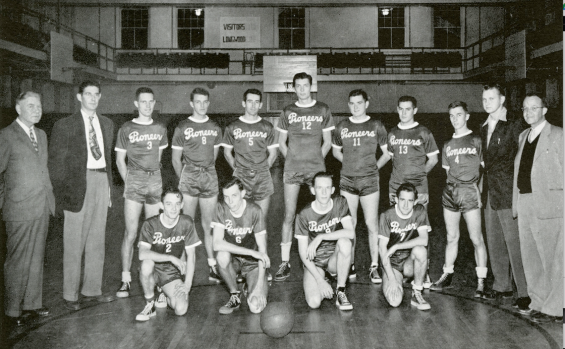 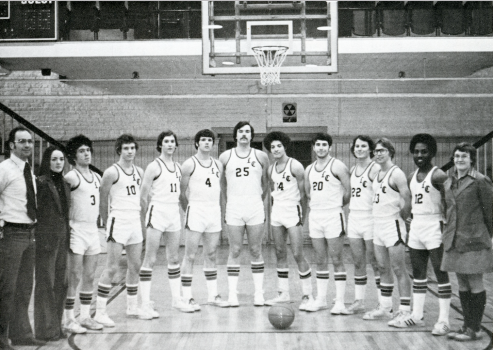 The only holdover from the 1947 team was Farmvillian James Stuart McGhee, first president of the Men’s Student Government, who graduated in 1950 with both a BA and BS in Chemistry. When they were short of players the Pioneers recruited students from other schools. For example, another Farmvillian, James Boyce Clark (1930- 81), was a member of that first Pioneers team. He is pictured in the 1949 Hampden-Sydney College (H-SC) Kaleidoscope as a freshman, transferred to Longwood, and is again pictured in The Virginian of 1950 as a freshman! In 1956 he took over the Western Auto store at 217 North Main St., which had been established by his father in 1938. He later served on the Town Council and as vice-mayor. Other players transferred to Longwood from Emory and Henry, Randolph-Macon, Elon, Georgetown and Duke. (The Evening Division of Longwood College opened for the first time in January 1949, and offered night classes, but night students were not eligible to play on a sports team.)

In the fall of 1950 there were only 25 male students but the 50/51 Pioneers looked to be stronger and taller than the 49/50 team. Dr. Fraser continued as their coach but Mr. Malloy was replaced as faculty adviser by Mr. French. Season tickets were $1 for students and $1.50 for non-students. They opened their 16-game schedule with back-to-back home games Dec. 1 and 2nd against powerhouses NBC of Roanoke and MCV of Richmond. The Pioneers lost both games, but the standing room only audience appreciated seeing two top-tier teams come to campus. The Pioneers also added games against Ferrum and VPI/ Danville.

In the spring of 1950 the men organized Tau Theta Pi, the first social fraternity for men at Longwood. Four Pioneers became charter members: Jimmy Thompson was on the organizing committee and the other three were elected as officers: Ned Orange, president; Shep Elmore, vice-president; and James Clark, secretary. Their first formal banquet was held Dec. 10, 1950, at Longwood Estate. President Lancaster was the speaker. Last pictured as a fraternity in The Virginian of 1952, Tau Theta Pi was nevertheless still active in 1958.

The Korean War was about to stop coeducation at Longwood dead in its tracks. On Jan. 17, 1951, Pioneer guard and sports writer for The Rotunda, Lester Smallwood, wrote: “The selective service laws which are now being rigidly carried out are grabbing numbers of men from the squads of small college teams. After considerable effort on the part of so many to make Longwood co-educational, the future of men’s sports … does not look too bright. It may be difficult to front the Legislature with a bill in ’52 for co-education at Longwood when there may be no men left here.” By February, of the 12 Pioneers who started the season, only seven were left. There would not be a third Pioneers season because there were, in fact, not enough men enrolled in the fall of 1951 to form a team. Despite a surge in enrollment beginning in 1955 of men seeking draft deferments, coeducation at Longwood would have to wait until well after the Korean and Vietnam wars were over.

An unsung hero of the Pioneers was Dr. Arthur Clifford Fraser (1887-1965), who sponsored and coached it both seasons. Coach Fraser was a doctor of veterinary medicine (NY University) but never practiced locally. He operated a farm near Hampden-Sydney from 1916 until he moved to First Avenue in Farmville in 1922. Always interested in athletics and young people, he helped coach football and basketball at H-SC, coached the town basketball team, started a Red Cross swimming instruction program at Farmville Lake, and acted as scoutmaster of the Farmville Boy Scout troop. In 1935 he established the Fraser Medal at Farmville High School, which was awarded each year to the boy and girl showing the highest degree of sportsmanship and athletic ability. In 1942 he organized a unit of the Virginia Reserve Militia at Worsham and was elected their captain.

The Men’s Student Government, last pictured in The Virginian in 1957, was still active in 1958 and men continued to be admitted as day students until 1962. In 1971 an agreement between Longwood and H-SC allowed students from one school to take classes for credit at the other school. Fourteen H-SC students instantly signed up for Longwood courses. That same year Longwood once again began admitting full-time male day students, now referred to as commuter students.

Women’s basketball continued to be played in French Gymnasium. Indeed, after the Longwood Board reluctantly (see NB below) voted in coeducational in August 1975, the new men’s basketball team played their first game there Nov. 30, 1976. On March 11, 1977, five nicknames for Longwood’s sports teams were submitted to the Board: Virginians, Lancers, Pioneers, Crusaders and Lions. “Lancers” was chosen as the official nickname. The Lancers joined the NCAA as a Division III school in 1978/79. The first basketball game played in Lancer Hall (now Willett Hall) was a men’s/women’s double-header Saturday, Nov. 15, 1980.

NB: When the law governing coeducation changed in 1975, only public schools that had traditionally been single-sex were exempted. By admitting men beginning in 1946 and again in 1971, Longwood could not claim that exemption.