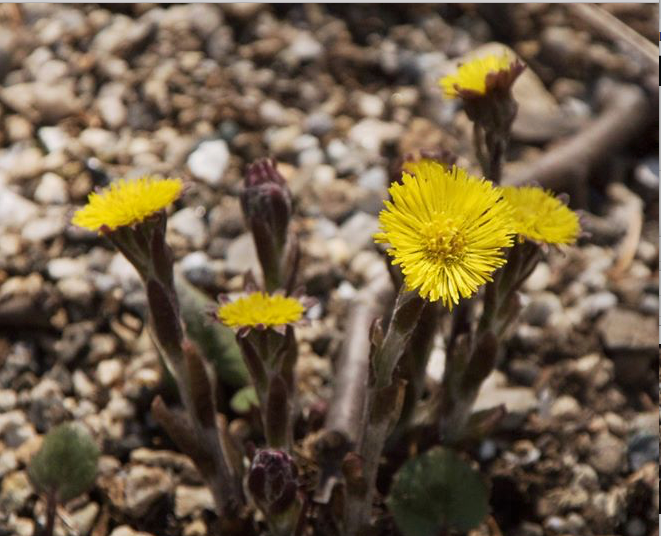 CYNTHIA WOOD The flowers of coltsfoot appear before the leaves and have very wooly stems.

By late February, most of us are so desperate for early signs of spring that we’re overjoyed to find henbit and purple dead nettle infesting our flower beds and dandelions blooming in the lawn. Pesky, weedy plants suddenly become long lost friends. There’s another non-native that blooms just as early and adds a bright cheery note to cool weather.

Coltsfoot (Tussilago farfara) is a native of Eurasia that was brought here by settlers for medicinal use, probably to treat coughs and congestion. It’s an interesting plant because the flowers emerge and bloom before the leaves. For this reason, one of its common names is son-before-the-father or filius ante patrem as it was known in the Middle Ages. The flowers somewhat resemble bright yellow dandelions, but have a central disk like daisies. They open on sunny days and remain closed when it’s cloudy. The flower stems are covered with wooly hairs and scaly bracts. Before the invention of matches, these wooly stems were wrapped in rags, dipped in salt petre, dried, and then used to kindle fires.

The flowers are followed by rosettes of green heart-shaped leaves that have long petioles. Walk trails in late spring/early summer, and you’ll find plants with interesting leaves that never seem to bloom. You’ve probably found coltsfoot; the plant in bloom and the plant with leaves are so dissimilar that when coltsfoot was being classified many years ago, botanists incorrectly believed that they were dealing with two different plants.

Coltsfoot grows from rhizomes and is capable of forming large, dense colonies as the rhizome system is deep and extensive. In some states, coltsfoot has become invasive. It’s a Class A noxious weed in Alabama and is considered invasive in Connecticut. It’s problematic in Massachusetts too.

Coltsfoot is generally found in open-disturbed areas – along roads, in ditches, and waste areas. It can tolerate a wide variety of soil types.

Coltsfoot has a long history of use in folk medicine and even in witchcraft. You may find recipes online for brewing teas and other concoctions. Recent research, however, indicates that the roots of this plant contain potentially toxic pyrrolizidine alkaloids.

Coltsfoot is an odd plant with the potential to become a pest, but it still signals that spring is just about here. In Finland where winters are long, the first appearance of coltsfoot is always reported in the media as it indicates the beginning of spring. It’s a nuisance there, growing in the cracks in sidewalks and other inhospitable areas, but the Fins are willing to forgive its aggressive tendencies in early spring.

I hope that you find some coltsfoot and that it makes you smile. Happy hunting.

CYNTHIA WOODS can be reached at Cynthia.crewe23930@gmail.com.