‘A great moment’ in Jayda’s journey 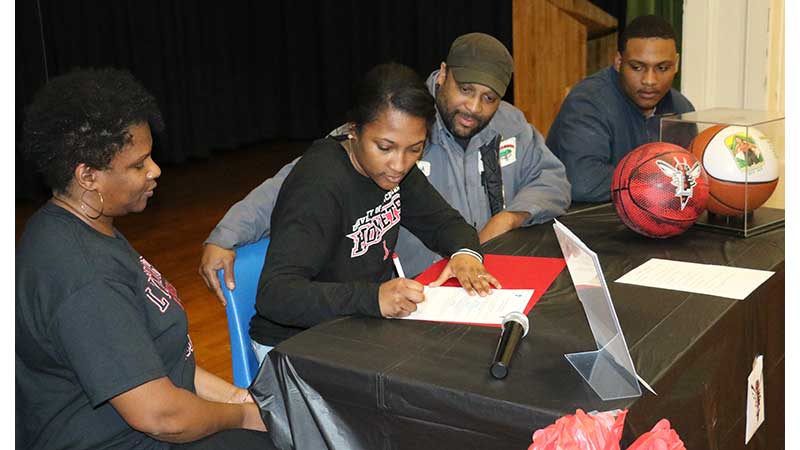 A group of family, friends and coaches gathered last week to celebrate Buckingham County High School senior guard Jayda Chambers at her signing ceremony in which she officially committed to play college basketball for the University of Lynchburg.

Chambers had verbally committed to the Lynchburg Hornets back in October, but making it official with the March 11 ceremony served as a special milestone.

“It means a lot, especially to have my family come down, see my teammates and friends here supporting me through everything,” she said.

Her mother, Lady Knights Head Coach Kelly Chambers, ran the event, welcoming everyone and then introducing a video showing photos and clips of Jayda’s basketball career at the youth league level, in the Amateur Athletic Union (AAU) and with the Lady Knights.

Coach Chambers shared some thoughts, offering thanks to all those who helped Jayda along the way, and then she brought Jayda and family members on stage for the signing. This was followed by photos with everyone who attended.

“This has been a great experience and just a great moment to have her family and her teammates and her friends to be here, because all of them played a big role in this journey,” she said. “… It was just an emotional moment for me because of all of the hard work that I know that she’s put in, that I’ve put in, to get her to this moment. It’s just really special.”

Estimating how long she has coached her daughter, Kelly Chambers cited nine years — three on Buckingham’s varsity squad and six across Jayda’s time in the youth league and AAU.

Jayda was considering multiple options of where to play college basketball, but she explained why the Hornets were ultimately her pick.

“They were the first ones to reach out to me, and after I went to my overnight visit, met with the coaches, stayed with the team and just visited the campus, it just felt like home to me,” she said. “I just knew it was the right college for me to go to.”

She is fresh off a stellar senior high school campaign in which she was named the 2018-19 James River District Player of the Year for girls basketball, but she knows she is in for a change to her on-court role once she gets to Lynchburg.

“Here I kind of play everywhere, but there I’ll be mostly a guard,” she said.

Kelly Chambers, the 2018-19 district Coach of the Year for girls basketball, will continue leading the Lady Knights next season, but she still plans to take in as much Hornets basketball as she can, keeping up with her daughter’s playing career.

“They play on Saturday, so I will definitely be able to make her Saturday games, and then I may be able to catch a Wednesday game here and there,” Coach Chambers said. “And they have a tipoff tournament and a Christmas tournament that they usually schedule, so those will not conflict with our schedule here at Buckingham.”