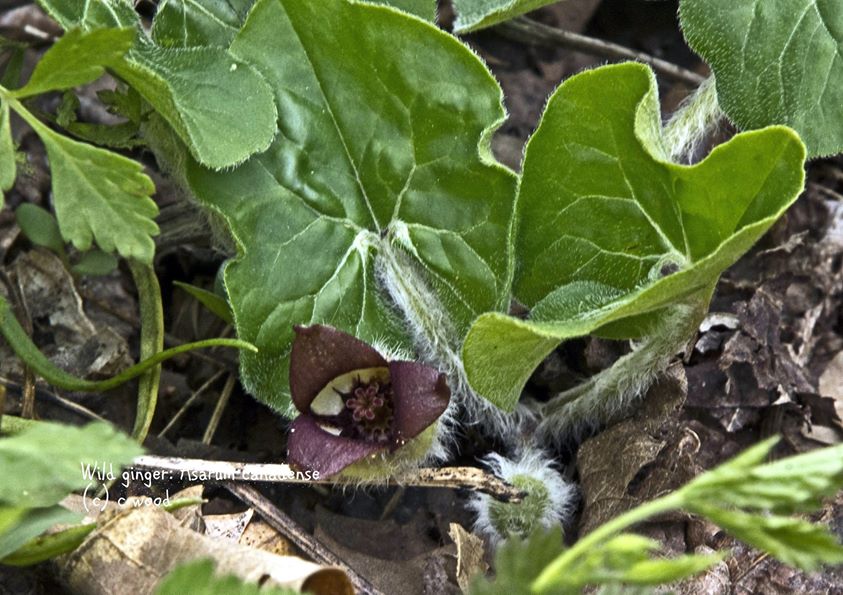 This is wild ginger. The scientific name is Asarum canadense L.

When people on my Facebook wildflower page talk about plants, there can be massive confusion. Many of them are intimidated by scientific names so they insist on using common ones. They don’t realize that common names for the same plant vary by region, state and sometimes even by families within a community. Uncle John’s poke berry may be Grandma’s poke weed and Cousin Bill’s poke sallat.

So, when someone reports on the Facebook page that she found wild ginger blooming at Twin Lakes State Park, there are questions. Does she mean Asarum canadense or Hexastylis spp., which has a number of common names, including heartleaf, little brown jug, and wild ginger. Similarly, Chimaphila maculata, which has a white stripe down the center of each leaf, is called spotted wintergreen, striped prince’s pine, pipsissiwa, and dragon’s tongue. Oh, the arguments that can result.

It’s so much easier to use formal scientific names. Every plant has a unique name and once you understand the logic, they’re easy to use. It’s important to remember that scientific names are part of a hierarchical system that has many levels. The three most important ones for us trail walkers and gardeners are: Family, Genus (Genera plural), and Species. They’re like nesting boxes. Species fit into similar groups or genera; Genera fit into large groups or families.

Family names are always made up by adding -aceae to the genus name on which the family name is based. For example: Rosaceae and Iridaceae (d added to help with pronunciation).

Genus names can simply be what the plant has always been called. Salvia, Malus, Rosa are what the Romans called sage, apples, and roses. Sometimes genera honor someone; sometimes they’re descriptive. Fuchsia honors Leonard Fuchs, a German botanist. Aquilegia is from the Latin word for eagle; the spurred petals of columbines are supposed to resemble the talons of an eagle.

Species names can also honor famous people, or they can be descriptive. Acer davidii is a maple named in honor of plantsman Jean Pierre Armand David. Descriptive species names include words, such as palustris (of bogs and marshes), sylvatico (of woods or forest), maritima (of the seashore), muralis (growing on walls), grandiflora (large flowers), nigrum (black), rubrum (red), caerulea (blue; think cerulean blue), esculentum (good to eat), and sativa (cultivated). The species name can also refer to the country of origin or where it was first found, but sometimes this can be misleading. For example: Mahonia japonica has been cultivated in Japan for years but isn’t from there.

And then you may find a person’s name after the species name. Why? That’s the name of the person who first gave the plant its name, not the individual who first discovered it. Names of recognized authorities, such as Linnaeus are generally abbreviated. For example, Linnaeus is L.

So … let’s put all the pieces together. Quercus alba L. is a white oak first named by Linnaeus. It is 1 of 29 species in the Fagaceae Family. Scientific names aren’t not hard; they just take practice. Think of them as pieces of a puzzle, and you can have fun learning them. Just be aware that what we know about plant species and how they fit together is constantly changing, so scientific names change to reflect new knowledge. The names in your favorite field guide or website may not be the latest. Always double-check.