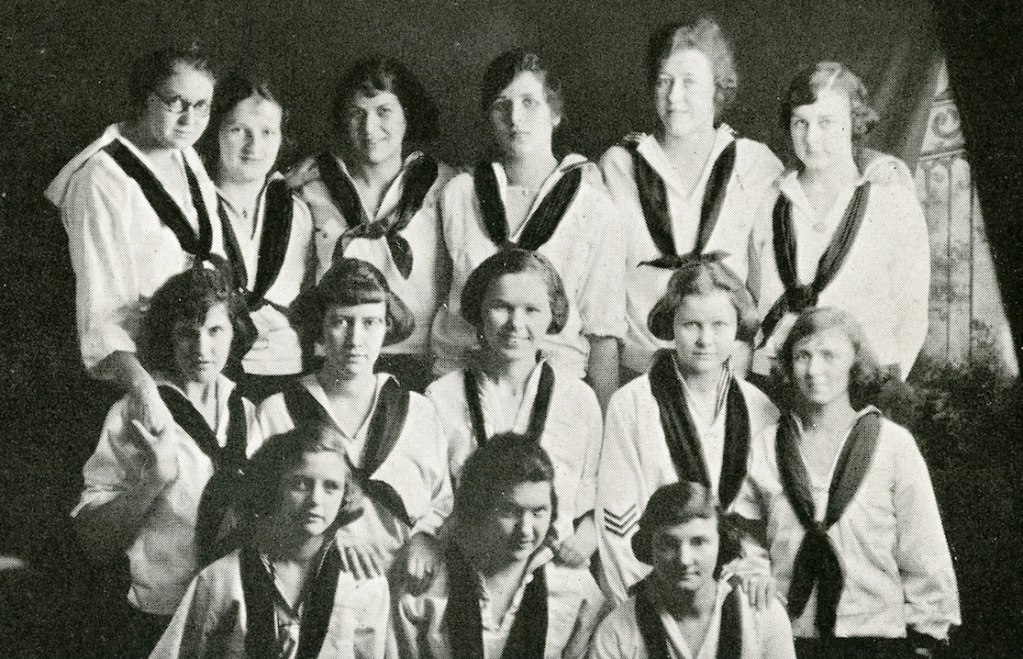 There were no known sports clubs or teams until 1898, when a Tennis Club and Bicycle Club, each with 14 members, were pictured in the school’s very first yearbook, the Normal Light, under the heading Gymnastics and Athletics. A Skating Club, Archery Club and two “basket ball” teams were pictured in The Virginian of 1905 (a Tennis Club was listed but not pictured).

Basketball was invented in Springfield, Massachusetts, in 1891 by Dr. James Naismith. Early balls did not have much bounce, so dribbling was out of the question. And it was a real pain to have to use a ladder to retrieve the ball whenever a basket was made. Most schools waited until balls improved and peach baskets were replaced by metal hoops before taking up the sport.

The Athletic Association was first mentioned in the 1911 Catalogue of the State Female Normal School at Farmville, Virginia and appeared for the first time in The Virginian of 1912. The 1914 catalog defined a regulation sports practice suit as “an all-white middy blouse, full dark serge bloomers and low-cut gymnasium shoes,” which helps explain the distinct naval look of the uniforms worn by the teams in old yearbook photos.

Up until 1920 all sports competitions at what was then called the State Normal School for Women (SNS) were intramural in nature and were held either on campus or in the Farmville Armory on Main Street. There had never been a varsity team that competed against off-campus opponents. The Rotunda of Feb. 15, 1921, reported that our very first intercollegiate basketball game was played against the SNS at Harrisonburg on Feb. 14, 1921, which we lost 52 to 17. The second game ever played was a rematch against Harrisonburg on March 11 at the Farmville Armory. Since this was a Friday night game, the Armory was packed with townspeople as well as students. Despite this show of support, we lost again.

The train was the means by which both teams traveled between Farmville and Harrisonburg. Each team arrived the day before the game and left the day after, making it a three-day affair. Unlike today, the visiting team was given the red carpet treatment, including a dance held in their honor the night before the game. This historic varsity basketball team is pictured in The Virginian of 1921 and Harrisonburg is mentioned. Thus we can conclude that our first varsity team was formed in the fall of 1920. (In case you’re wondering how The Rotunda was able to publish the score of the first game the day after it was played, the publication date is a typo. Instead of Feb. 15, a Tuesday, it was published on Feb. 25, a Friday.)

In 1924 the school got a new gymnasium when the Student Building (later renamed French Hall) was completed. Friday, Feb. 6, 1925, was a day of firsts. Before the first game played in the new gym, the first out-of-state team was treated to a luncheon in the Tea Room and, after the game, to the first dance held in the new gym. On Feb. 14 The Rotunda stated: “The Farmville Varsity dedicated the new Gym by defeating South Carolina 25 to 15.” Ironically, the next game played at the new gym was a Hampden-Sydney College (HSC) “home game” against the University of Richmond. According to a Feb. 13 front-page story in The Farmville Herald, demand was so heavy that “due to limited seating capacity [at] Gammon Gymnasium … the game was switched to the big fine new gym in Farmville” at the State Teachers College (STC) on Monday, Feb. 16.

In the fall of 1925 Miss Olive T. Iler (1897-1982), a graduate of Sargeant’s School of Physical Education in Massachusetts, was hired as a physical education instructor. Over the next 41 years she would become one of the most beloved teachers and coaches in the school’s history. Her varsity basketball teams went undefeated in 1936, 1937, and 1938, playing teams in Virginia, Maryland, and New Jersey. In 1967, the year after she retired, Iler Gymnasium was named in her honor, but varsity basketball continued to be played in French Gymnasium.

One of the most puzzling things encountered in examining the old yearbooks was the existence of both Junior & Senior and third and fourth year basketball teams. By carefully following certain girls over time, it turns out that third and fourth year refers to the last two years of high school and Junior & Senior refers to the first two years of college. For example, a fourth year student in 1921 might become a Junior in 1922, but it was also possible that she could skip a grade and become a Senior. Thus the SNS was both a two-year high school and a two-year college until 1923/24, when freshman and sophomore classes were organized for the first time. (Graduating from college was a big deal but graduation from the college high school was not even mentioned in the yearbooks.)

An unexpected result of this research was the discovery that the first men’s varsity basketball team was formed in 1947, two years before Farmville STC officially became Longwood College. This will be covered in the second part of this series.

NB: It is interesting to note that back in the day the Normal Laundry did all the washing on campus, including sports uniforms. In 1903, for example, Mrs. Newby was in charge of supplying “clean clothes for 300 persons, besides bed and table linens for the entire school,” every week.