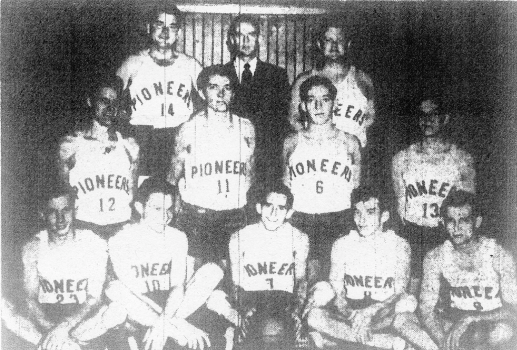 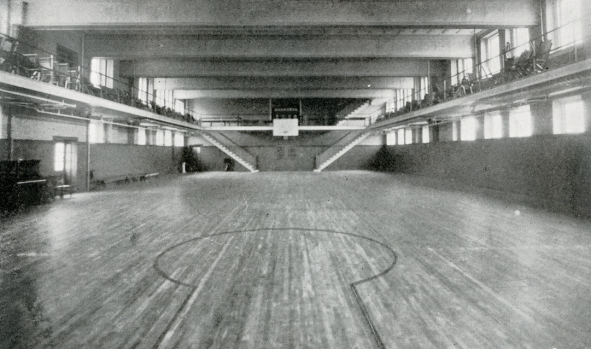 This 1934 photo shows the full basketball court in French Gymnasium together with the surrounding balcony where up to 800 spectators sat during games. Varsity basketball was played here from 1925 to 1980. (A swimming pool was proposed in 1934 but construction had not yet begun).

Second in a series

In the fall of 1946, 17 men, mostly veterans of World War II, enrolled as day students at Farmville STC. During the 1946/47 school year six additional men matriculated, for a total of 23. There may have been an occasional male day student in the past, but this was different. The Virginian of 1947 lamented: “The matriculation of the veterans marked a new record in S. T. C. history. For the first time this was a coeducational institution.” And some of the men may have been more than just day students. A front-page story in The Rotunda of Oct. 25, 1950, referred to Harold Hutter, a junior majoring in mathematics, as a “resident student.”

The Rotunda of Jan. 15, 1947, announced the formation of a Farmville STC boy’s basketball team “composed of 13 veterans.” They had no uniforms, no faculty adviser, and no nickname, but they did have a coach—Rev. Philip A. Roberts, pastor of the Farmville Presbyterian Church. The 13 players were: [Carroll] Gills, Rosser N. Flippen, George Robertson, Herbert E. Maxey, Johnnie Lomenzo, Robert Slate, Eubank Dunton, Jack H. Lane (manager), [James Stuart] McGhee, John Van Hoy, Joe Wilkerson, Leonard Maxey, and Jimmy Jones. During the season Billy Watson Southall and Alger R. Southall joined the team. The girls would soon give the team a nickname, “The Skins.”

The first basketball game ever played by a men’s team at the college was on Friday night, Jan. 23, 1947, in French Gymnasium, where the “Farmville STC boys basketball team” defeated Cumberland High School 18-12 (no shot clock). The gymnasium had a balcony that surrounded the basketball court where 800 spectators could watch the game. The referees stopped the game and asked the vets to remove their shirts so that it would be easier to tell the two teams apart. The girls went wild, hanging over the balcony railing and yelling “Go Skins!” As word of “The Skins” spread across campus, the balcony soon became so full that there was a genuine fear that it might collapse. On Feb. 5 The Rotunda wrote: “It would be a fine gesture on the part of the girls to buy [uniforms] for the team.” But the girls liked what they saw, so no money was raised.

The first off-campus game was played on March 3 against the Mary Washington men’s team in Fredericksburg. Although “The Skins” won most of its 16 games in 46/47, another men’s team was not formed until 49/50.

By 1948 there were enough male students to form a Men’s Student Government Association. By the fall of 1949 there were 30 male students, enough for the Men’s Student Government to authorize the formation of a Men’s Athletic Association, which authorized the formation of a men’s basketball team. Unlike the 1947 team, the 1949 team received “full sponsorship and backing from the college.” By the end of October, the men and women voted to combine the Men’s and Women’s Athletic Associations into a single Athletic Association (AA). When the question of a nickname came up, the AA authorized the men to choose one even though the women’s teams did not have one. The men choose “Pioneers” as their nickname.

The Pioneers wore blue and white uniforms and played against teams at other colleges, such as Richmond Professional Institute (RPI), Mary Washington, Hampden-Sydney College (H-SC), Lynchburg College and Madison. But they also played against Farmville and Crewe town teams. They played their first game on Dec. 1, 1949, at RPI. They played their first home game in French Gymnasium against the Farmville Town Team on Dec. 3. All of the men participated. Those not on the team helped by selling tickets or making posters. Not to be left out, the women formed a cheerleading squad.

To further prove their support for the Pioneers, during Christmas break the 25-year old basketball court in French Gymnasium was refurbished to meet “regulation basketball requirements,” albeit adequate lighting would continue to be a problem. The work was not quite finished when the team returned to action on Friday night, Jan. 6, 1950, so H-SC graciously allowed Longwood to play its home game against Madison in Gammon Gymnasium. Perhaps the greatest show of support by the college came when the Pioneers were set to play Mary Washington in Fredericksburg. The “Longwood Girls,” organized by Miss Olive Iler, sent a telegram to the Pioneers wishing them “luck and victory.” Thus encouraged, the Pioneers won that game 62-41.