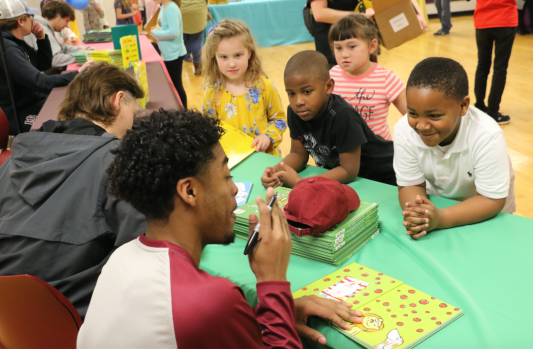 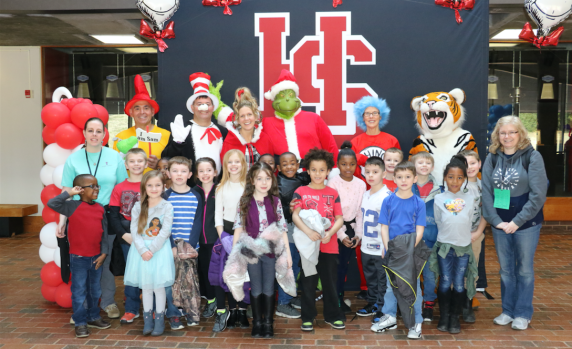 Kirby Field House bubbled with excitement Wednesday as hundreds of second-graders from Prince Edward and most of the surrounding counties came to Hampden-Sydney College (H-SC) to receive encouragement to become lifelong readers through participation in Dr. Seuss Day.

H-SC Director of College Events Cameron Cary noted the event has existed for about 20 years, but it started as an event in which college officials went to Prince Edward County schools and delivered books.

But Lesley Stimpert, the wife of H-SC President Dr. Larry Stimpert, brought a major change to the execution of Dr. Seuss Day, and this is now the third year it has been held at Hampden-Sydney.

“Mrs. Stimpert, being a librarian, said, ‘Well, if it’s a literacy project, we want them to read it, to enjoy reading, to get them excited about reading,’ so we decided to bring them all here and just open up the gym and have loads of fun,” Cary said.

Mrs. Stimpert took a few moments during the morning session Wednesday to talk about the passion that drives the event.

“Just like the other years, it’s really important for us to get books into the kids’ hands, and (for them) to select their own,” she said. “Being a children’s librarian, kids come on into a library and they have these seas of books to choose from, and it’s important that they get the right book for them, something that they want.”

“So they get to choose the book, and they actually get to take it home for free,” Stimpert said. “So every child gets a book here, and we just want them to be excited about reading and make them lifelong readers.”

Students chose their books from tables manned by Hampden-Sydney student-athletes and coaches who autographed the books for the excited children after they made their selections.

Later, they posed for photos with some famous Dr. Seuss characters who made appearances courtesy of H-SC staff members who dressed up as them.

There were a variety of other things to keep the children occupied as well. On the floor of the basketball court, there were two obstacle courses and four bounce houses. Teddy Spaghetti was on hand to entertain the visitors, and another space allowed for small games, like cornhole.

Since it has become an event hosted by H-SC, Dr. Seuss Day has been restructured each year. Cary noted that two years ago, all the participating schools came at one time in a single morning.

“It was crazy,” she said. “Last year we broke it into two days, so we split the crowd in half and did two days worth, and this year, we have the same split, but it’s morning and afternoon.”

Cary said that when all of the schools invited can participate, it totals about 1,200 students.

This year, Nottoway and Cumberland counties were not able to attend due to timing conflicts. Nevertheless, the remaining counties involved include Appomattox, Amelia, Buckingham, Charlotte, Lunenburg and Prince Edward, which includes Fuqua School.

“This morning, we have somewhere right around 600 (students),” Cary said. “This afternoon will be right around 400. And the schools that are missing, we’re still going to send them their books.”

Cary shared what would make the event a success to her.

“If we found one little boy in this group who did not like to read who came here, met a student-athlete and said, ‘He came to college here, and he reads this book, and he signed this book for me,’ (if) he goes home and reads it, then I’m happy, because it’s little boys that struggle,” she said.