Dukes finish strong on the mat at states 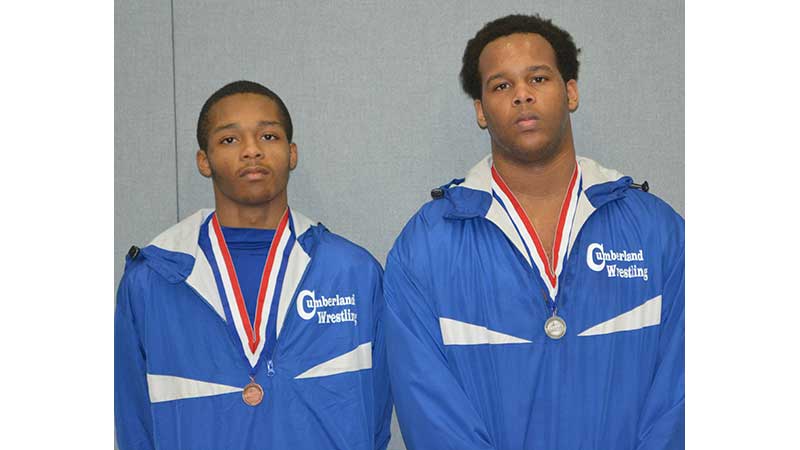 Paul Dixon, Dukes head coach, has been developing his small roster of wrestlers all season long for states, which he called, “The Show.” He was pleased with the payoff.

“I thought it was great; I really did,” he said. “… They did really well. If they lost a match, it wasn’t because of lack of effort.”

Cumberland very nearly had a trio of wrestlers to place.

“Trevor Dayton came within one match of placing, and the other two kids, Sabian (Luchynsky) and Thomas (Trowbridge), they’re going to get there,” Dixon said. “They’re still young … It is hard to place at a state tournament, whether it’s (Class 1) or (Class 6), because everyone’s there because they placed in their region.”

The Dukes were without the services of sophomore 120-pounder Lamard Jackson, who was ultimately sidelined by coach’s decision due to sciatica.

“When you only have five guys, it’s going to be tough to place in the top 10,” Dixon said, though he noted it is possible.

He said Cumberland was a point out of 13th place and two points out of 12th.

“Tre(quan) was within one second of beating the regional champion,” the coach said. In the waning moments, he “went in and took a shot, and the kid from Northampton was able to get two points and win by a point.”

The final score was 8-7, and Dixon expressed great pride in Trent for his performance.

“Trequan’s match against the kid from Northampton was phenomenal, for third and fourth (place),” he said. “And Trequan did everything we’ve shown. It was like a clinic on what the coaches have shown him.”

Speaking of Kaijhaun, Dixon said, “He beat the kid from Galax in the semis in sudden victory overtime. … The kid took a poor shot on him, and he was able to spin to get two points.”

In the final, Kaijhaun Trent was pinned in the first round by a wrestler from Grundy High School who was highly experienced at the state level.

Dixon said that Kaijhaun “went for a headlock, and the young man was able to re-roll through it, which means that K.T. threw him too hard. And that’s all it takes is one little error.”

The coach noted that K.T.’s opponent had been to states four times and had placed all three times prior to this year.

Reflecting on Cumberland’s 2018-19 campaign as a whole, Dixon said it was “definitely a successful year. The kids, they had to deal with a coaching change last-minute, from me being promoted to head coach last-minute. They had to adjust to an entire new program. In wrestling that is tough. Different coaches can expect different things. … It was a complete change for them, and I think they stepped up.”

Though K.T. will be graduating, Cumberland will return the rest of its roster, and Dixon expects success to breed success in the form of a growing program.