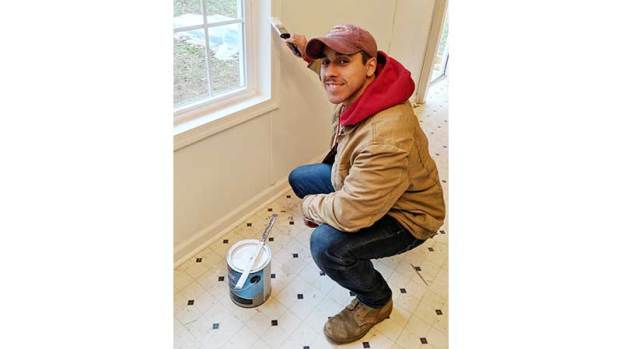 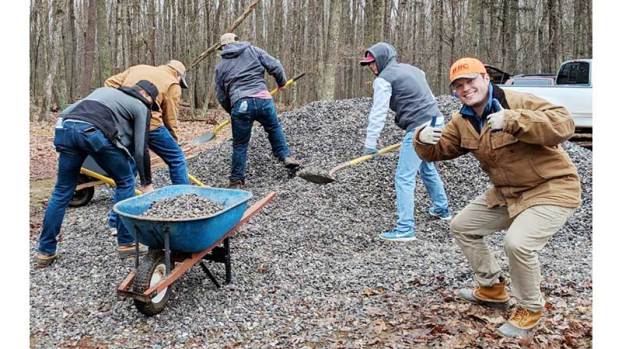 More than 40 Hampden-Sydney College (H-SC) students gathered early in the semester to honor the legacy of Dr. Martin Luther King Jr., partnering with the Farmville Area Habitat for Humanity for a day of community service, a recent H-SC press release cited.

Officials noted in the release that the young men put finishing touches on a previously foreclosed property, dividing into groups to build porch railings, paint the home’s interior and gravel the driveway — a four-hour effort that the Tigers tackled by hand with wheelbarrows and shovels. By mid-afternoon, a clean-up crew arrived — seven H-SC students who polished the home’s floors, kitchen and bathroom — and the renovated home was ready for its new residents.

Now in its fourth year, Hampden-Sydney’s participation in the national MLK Day of Service is “totally a student-driven event,” H-SC Director of Civic Engagement Sandy Cooke said in the release.

Cooke credits senior Henry O’Neal, a government major from Virginia Beach, with the event’s creation and success at the college, the release highlighted. The pair first collaborated in 2016 to organize a way for H-SC students to observe “a day on, not a day off” in honor of Dr. King.

Officials in the release stated that through an internship with Obsidian Solutions Group, O’Neal learned of an illegal tire dump near the High Bridge Trail, a Virginia state park located in Prince Edward and Cumberland counties. In conjunction with the national day of service, he organized efforts to remove and recycle more than 1,000 tires that had accumulated within sight of the trail.

The following year, O’Neal and almost 50 other H-SC students partnered with Prince Edward County Public Schools to help create an outdoor classroom behind the high school, the release cited.

Officials said that with an infectious smile and characteristic humility, O’Neal downplays his role in the college’s observance of the MLK Day of Service.

“It’s nothing spectacular, just people helping people,” he said in the release. Although he did admit, “I’m always a bit surprised — and grateful — that so many guys show up at 8:30 on a Saturday morning in the middle of January to do community service.”

Now in his final semester at H-SC, he feels confident the service event will continue after he graduates, the release noted.

“We have enough guys interested in it, and the fraternities and campus organizations help make it happen,” he said in the release, particularly Kappa Sigma and the Minority Student Union.

“It’s a good way for diverse groups across campus to come together and make the community a better place on a day honoring Dr. King,” O’Neal said in the release. “It shows the power of his message: No matter who we are or what we look like, we can come together as one to enrich the community around us.”

The release concluded with Cooke pointing out how the national day of service is a perfect complement to the college’s distinctive mission.

“Martin Luther King’s legacy will always be one of a life given in service to others for a higher purpose,” she said in the release. “At Hampden-Sydney, we strive to teach our young men daily to live out their lives as Dr. King did — as good men and good citizens.”