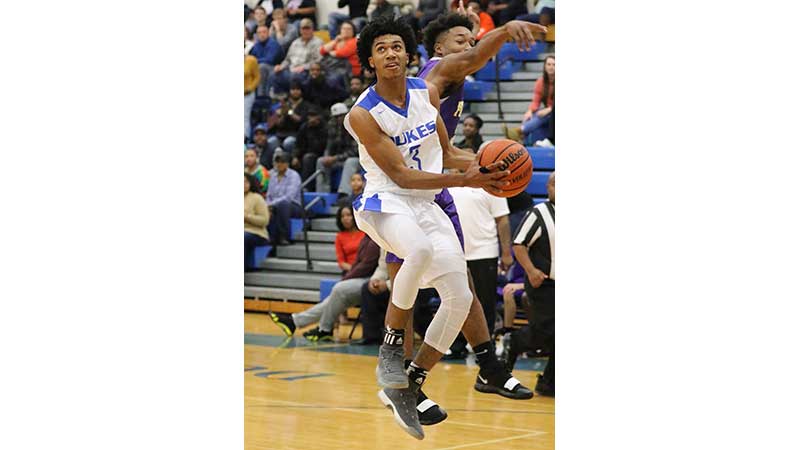 Cumberland County High School senior guard Mark "M.J." Patterson Jr. was one of three boys from the area to make the all-district first team this season. (Photo by Titus Mohler)

Patterson stepped up to the next level of recognition this year after making the all-district and all-region second teams last season.

“I believe M.J was selected by the other coaches in the James River District because of his all-around game,” Dukes Head Coach Tyrone Mosby said. “His position on the court is shooting guard with the capability of running the point guard position if needed.  His shooting ability, ball-handling skills and havoc defense are recognizable by the coaches and players.”

“Jalen played a huge role for us all year, both on offense and defense,” Knights Head Coach Taylor Boyers said. “On offense he really stretches the floor for us with his shooting ability, but he’s also versatile to put the ball on the floor and attack the basket when we need him to. He led the team in points and rebounds. I’m extremely proud of him to receive this honor because it’s well-deserved. We’re excited to have him back for another year.”

He averaged 13.3 points, six rebounds and two assists per game this season, shooting 39 percent from three-point range and 78 percent from the foul line.

This season’s honor was Payne’s first district recognition as a basketball player. He averaged 12.1 points, 3.8 assists, 3.5 steals and 3.4 rebounds per game.

Eagles Head Coach Michael Jackson Jr. said Payne “is a great kid, works hard on and off the court and is a great team player. His success on the court allows others to flourish due to his presence, and other coaches saw it just like I did.”