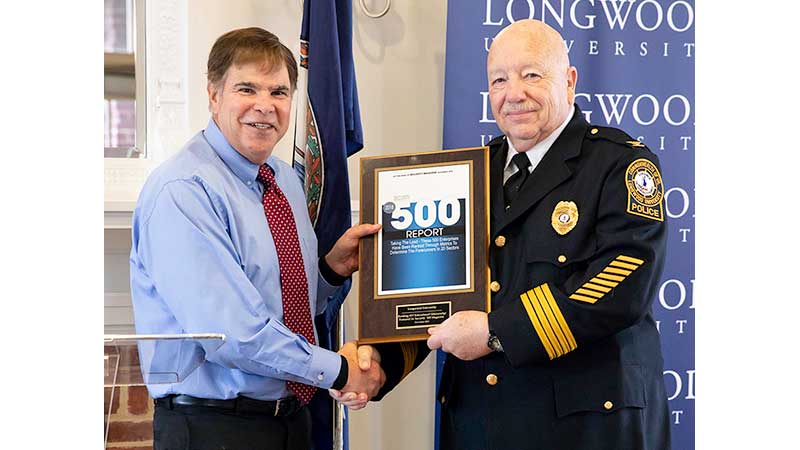 For an unprecedented ninth straight year, Longwood University’s police department has been ranked among the best university security operations in the country and is the top-ranked department among Virginia colleges and universities, a recent Longwood press release highlighted.

The top-20 ranking in the higher education category appears in the annual list published by Security Magazine, officials said in the release. Longwood, at No. 17, is the highest-ranked institution of higher education in the state and ranks behind only two other mid-sized universities nationwide.

“This continued ranking reflects what we hear from students and parents every day,” he said. “Our community not only feels safe on campus but also has a strong sense that our police department is being proactive by embracing new technology like the LiveSafe app that students can access from their smartphones and use to communicate directly with police, adopting community policing practices and responding to concerns with promptness and transparency.”

Officials cited in the release that the Longwood University Police Department (LUPD) has been led since 2007 by Col. Bob Beach, whose nearly 50 years in public service — most at one of the state’s busiest police departments in Fairfax County — anchor the department with deep experience and trusted leadership.

During the 2016 U.S. Vice Presidential Debate, one of the largest and most security-intense operations in Longwood history, there were no arrests or major medical emergencies, a testament to the planning and operational capabilities of LUPD, the release noted.

“Our police officers are some of the finest I’ve worked with in my career,” Beach said in the release. “Their commitment to this campus and to the larger community is unmatched, and I have seen them go above and beyond their call every day since I’ve been here. To their credit, they are always willing to try a new initiative, learn a new technology or rise to a challenge set before them. That’s why we are consistently ranked among the best in the country.”

Longwood President W. Taylor Reveley IV made it clear how important it is to him that the LUPD is worthy of such high acclaim.

“Campus security is foremost on the mind of every university president in the country,” he said. “The extended Longwood community is very fortunate to be able to rely on a police department with the kind of breadth and depth of experience and training that our officers draw from every day. That they are ranked among the best in the country is a testament to what we see every day: their professionalism, commitment to this community and compassion are second to none.”