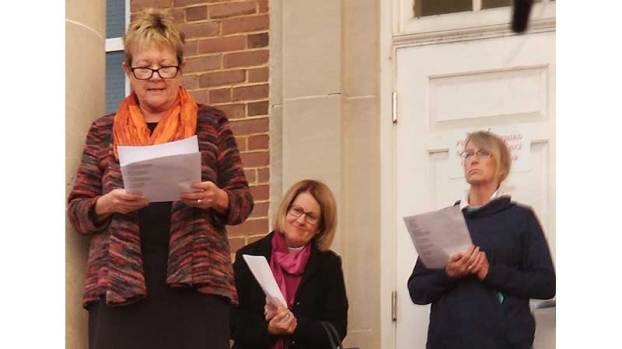 Patsy Watson with the Farmville-based Interfaith Collective, at forefront, speaks during a vigil remembering those killed by recent violent acts in Kentucky and Pennsylvania. With Watson is Nancy Meck, center, rector of Johns Memorial Episcopal Church and Margaret Lindsay. (Photo by Jill Ahmad)

Participants sang “God Bless America” by Irving Berlin and “This Little Light of Mine.”

According to documentation sent by the Interfaith Collective, Watson spoke about the impact of the loss of the two individuals in Louisville, where the assailant was believed to have been motivated by racism.

“These individuals have parents, siblings, children and neighbors who are forever impacted by the fear brought on by these attacks,” Watson said.

“We saw the country’s largest attack against the Jewish community ever with the loss of the lives of 11 people and four police officers were injured,” Watson said. “These officers risked their lives responding to yet another attack from a hate-filled individual. Other first responders such as EMTs along with the medical teams at various hospitals will forever be changed due to the trauma of this shooting. We know that anti-semitic incidents have surged, and each of us must take a stand.”

Watson said five of the 11 victims had been alive during the reign of Adolf Hitler.

“If our Jewish friends and family members tell us about anti-semitism, we must believe them,” Watson said. “When our African-American friends and family tells us about hateful words and acts directed at them — we must believe them. These are not isolated incidents. We must research hateful acts and speech and not brush them off. We must help those organizations who fight discrimination.”

A letter written by Ronnie Kiehm, pastor of Farmville Baptist Church, was read during the vigil.

Kiehm’s letter cited a prayer posted online by Abby Thornton Hailey in “A Prayer in times of violence,” from the Corrymeela community in Ireland, which reads:

“God of all humanity, in times of violence we see how inhumane we can be.

We pray for those who, today, are weighed down by grief.

We pray for those who, yesterday, were weighed down by grief.

We pray, too, for those who help us turn toward justice and peace.

Turn us all toward justice and peace because we need it.

Officials with the Robert Russa Moton Museum and friends honored Hugh Kennedy, who served on the museum board for more... read more