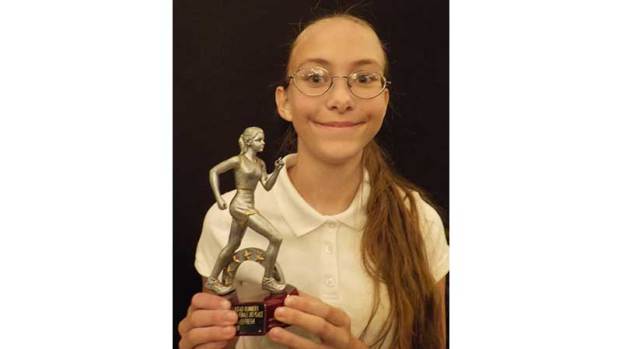 Twelve-year-old Elizabeth McElfresh, of Farmville, was highlighted as being among the Lynchburg Road Runners Club’s (LRRC) fastest runners at the club’s annual awards banquet held Oct. 23.

She was recognized as the third-place overall female winner in the 2018 LRRC Race Series with 553.03 points.

Jennifer Lully, of Lynchburg, was the first-place overall female winner with 604.9 points, and Tiffany Boydoh, of Forest, placed second with 557.67 points.

The race series consists of seven races of varying distances — 5K, four miles, five miles, 10K and half marathon (optional and 20 percent bonus points for running a 5K race on the same day) — taking place between April and August in and around Lynchburg.

The points series is a “best of six” where those runners who ran all seven races are able to drop their lowest race. Runners need to have completed four races to be ranked.

In 2018, more than 1,400 men and women participated in the races with close to 100 meeting qualification for ranking. The series is open to all those who participate in the races, and awards are presented to age groups from “12 and under” to “over 70,” as well as Masters and Overall winners.

McElfresh ran in all seven races culminating in the Lynchburg 5K. Her highest overall finish was 25th in the Spring into Spring 4-Miler, and her highest podium finish was third in the Humankind 5K. She also collected five age group wins.

During the Commonwealth Games 5K, she qualified for the 2019 State Games of America, which will be held in Lynchburg next summer.

McElfresh is a seventh-grade student at Prince Edward County Middle School where she runs track.