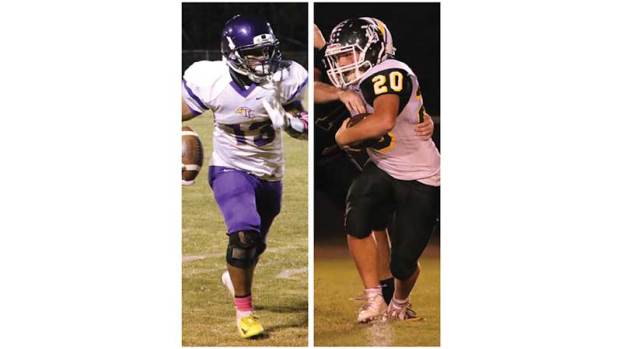 Regular season finales: The end of the 2018 varsity high school football season has arrived with three dramatic showdowns on the gridiron slated to unfold Friday night and Saturday afternoon. Headlining this trio is the battle between Buckingham County High School and Prince Edward County High School that is rife with playoff implications. Leading the Eagles into the conflict will be senior wide receiver Rah’Quan Payne, pictured at left, and leading the Knights will be junior running back Walter Edwards, pictured at right. (Photos by Titus Mohler)

Coach’s game notes: The Knights have had the season-long goal of returning to the playoffs for the first time since 2015, which was the last in a stretch of seven straight Buckingham playoff years. The Knights enter this game with the understanding that if they win it, they’re in the Region 2C playoffs.

As Buckingham sizes up the Eagles, it sees a normal Prince Edward team featuring lots of speed all over the field, offensively and defensively. On offense, the Eagles have a good quarterback in freshman Nate Reed, a good running back in senior J’Sean Dupuy, an all-region receiver in senior Rah’Quan Payne, and other good receivers as well, including senior Tajh White.

The Eagles must win and receive help from other teams to reach the postseason. Prince Edward is preparing itself for a highly athletic Knights squad that has gone to a run-heavy offensive system which has proven quite beneficial to it. The Knights are starting to hit their stride. They have good size up front, and their athletes are notably young and already helping make up an impressive football team.

There is not one defensive standout in particular, but the Knights’ overall defensive unit is outstanding, keeping teams off balance as it features multiple schemes. Their front seven are aggressive, and they cover well on the back end.

The Eagles hope to have senior running back Rahme Marshall back at full strength.

Coach’s game notes: A victory over Broadwater will be important for the Falcons as they look to maintain a place among the four playoff-bound teams in Division III of the Virginia Independent Schools Athletic Association.

The Vikings seem to be a young squad. On offense, they mix things up a good bit between the running and passing games. Sometimes it works out well for them and sometimes it doesn’t.

Their main offensive weapon is their running back. He’s not incredibly big, but he’s decently quick and he simply runs hard.

Broadwater is kind of spotty in the passing game. The team’s quarterback is a fairly decent thrower, and his go-to target is a significantly tall tight end.

On defense, the Vikings are blitz-heavy and man up on the outsides.

Coach’s game notes: This game does not have playoff implications because the Dukes are part of the small Region 1B. The low number of playoff-eligible squads means every team makes the playoffs. Meanwhile, the Statesmen are in not in contention in the larger Region 2A.

Nevertheless, the Statesmen are a pretty good team despite their record, and they have some players that can really play.

You never know what you’re going to get with the Statesmen offense, as they run four different sets and run them all pretty well.