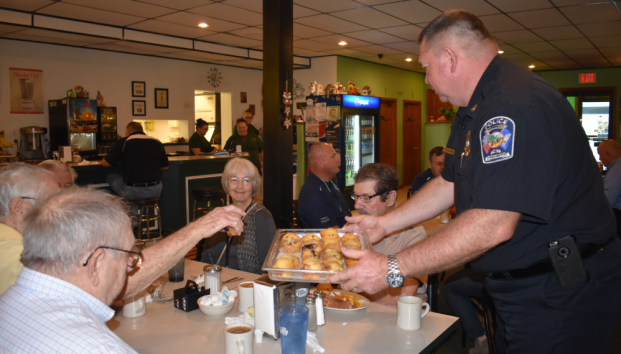 Sharing cups of joe with cops

Police cars dotted the parking lot of Merk’s Place Wednesday morning, though not to investigate a phone call or complaint. Instead, officers sat with diners who were having breakfast.

Farmville Police Department Chief A.Q. “Andy” Ellington said the department typically organizes a “Coffee with the Chief” event periodically, where people can have a morning cup of joe with the Farmville chief. However, due to Wednesday being the National Coffee with a Cop Day, Ellington said the Farmville Police Department wanted to expand the event to include Sergeants, Lieutenants, Corporals and Officers.

“(We’re) doing it as part of that celebration,” Ellington said.

According to the National Coffee with a Cop Day, the goal of the event is to “encourage communication and positive interactions between law enforcement agencies and the public.”

Ellington said some of the officers who attended the breakfast at Merk’s were just coming out of shifts that began 7 p.m. Tuesday evening.

The Town of Farmville Public Works Department will be closed Oct. 8 in observance of Columbus Day. Changes to the... read more